Oh how I’ve missed the rush of new sights, sounds and experiences that come with a city break. So much more than mere respite from the everyday, those few days away offer a chance to reboot the mind and soul. And with only 48 hours to explore, every glorious moment counts (there’s always time to sleep on the plane home, after all). Having been deprived of such adventures over the past couple of years, an invitation for a ‘Greekend’ in Athens is snapped up.

It is, remarkably, only my second time in the country; my first ever visit was to Crete, last summer. It was a holiday that saw me drawing up a list of other Greek locations I’d like to visit; Athens had been vying for top spot. Often passed through on the way to jump on a ferry to a Greek Island, I’d been urged not to overlook this bustling, noisy, colourful, dynamic, cultured city, with all of its magnificent history. I didn’t need telling twice… 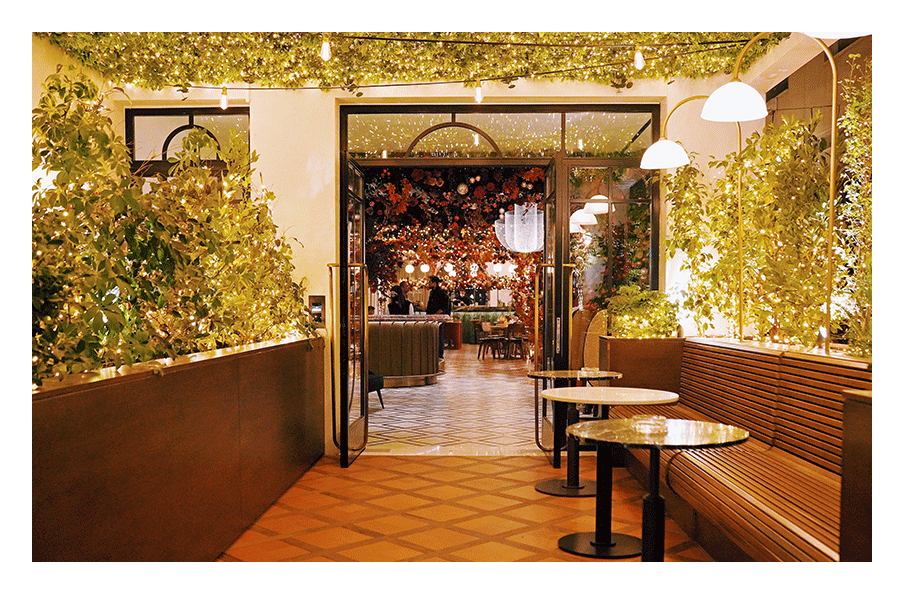 We are staying at one of Athens’ newest luxury hotels, the 5* Gatsby Athens, which opened its doors for the first time last autumn and is already making its mark. Paying homage to the art deco era, the building, formerly a police holding station that lay empty for many years, has been totally renovated in an effortlessly elegant style. Historic buildings in Athens are required to retain classical and period features, so renowned Greek architecture firm WOA had a challenge on their hands. The shell remains much as it was when it was built in the 1930s, though plenty of greenery has been added to the exterior, in line with urban regulations. Where changes have been made they marry seamlessly with the original features, like the marble that now accents the staircase, sourced from same mountain as was used on the Acropolis.

The interiors make the most of the glamour of the era; brushed gold and blush pink feature heavily – my room has a pink and gold-tiled bathroom that feels movie star-ready. The team at interior design firm Michaelis Boyd, whose signature style is instantly recognisable from The Bloomsbury in London, have pulled together a casual and very cool vibe. 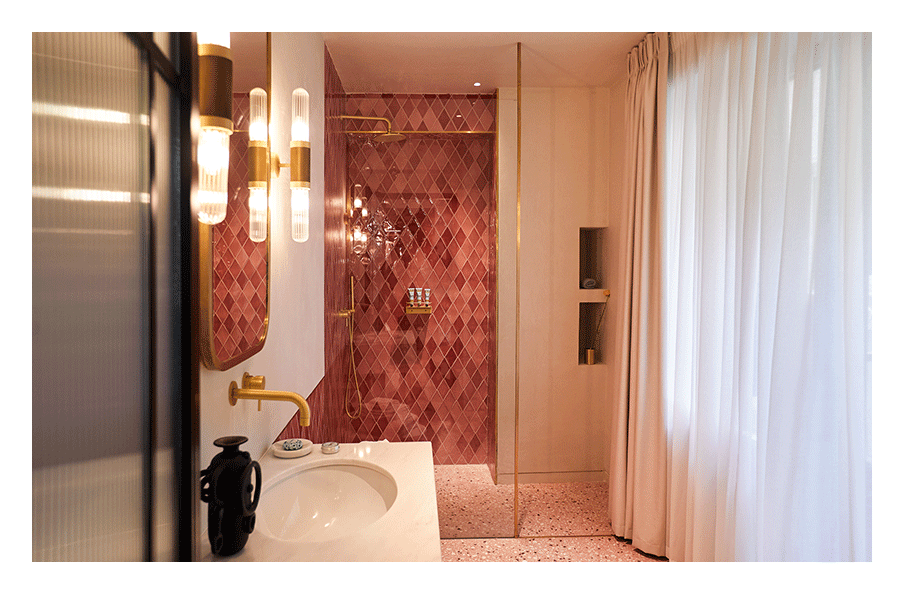 The lobby leads to a restaurant serving brunches, afternoon tea and cocktails. Judging by the fashionable crowd here, it has clearly already become a go-to spot for locals as well as guests. On our arrival we are offered a mojito mastiha, a local twist on the classic mojito, created with mastic liqueur from the island of Chios. Sharing plates are passed around; massive feta salads and moussaka croquettes (which are divine). Everything agreeably washed down with a very good local rosé wine, we retreat to our rooms to freshen up before we head out to explore Athens.

With its luxurious bathroom, and a huge, super-comfy bed, it’s tempting to stay put in my room, but once I’ve unpacked and checked out the view from the Juliette balcony, I’m ready to don my trainers and hit the streets. Top tip, the best way to see Athens is on foot, and to say the pavements are a little uneven would be an understatement, so pack footwear accordingly. We meet up with our guide, artist Niko, on a street-art tour run by Alternative Athens, a unique tour company that offers a way to see the city in a new light. We visit neighbourhoods outside of the classic tourist zones and see some incredible street art, learning how each piece relates to the current social and economic situation in Athens. Riot Dog is a particular favourite: a huge image of a stray dog who became a Greek folk hero after participating in anti-austerity protests in 2011. We end our tour in graffiti-central, Psiri, where we perch on high stools to drink powerful gin and tonics at Kalimeres Bistro. 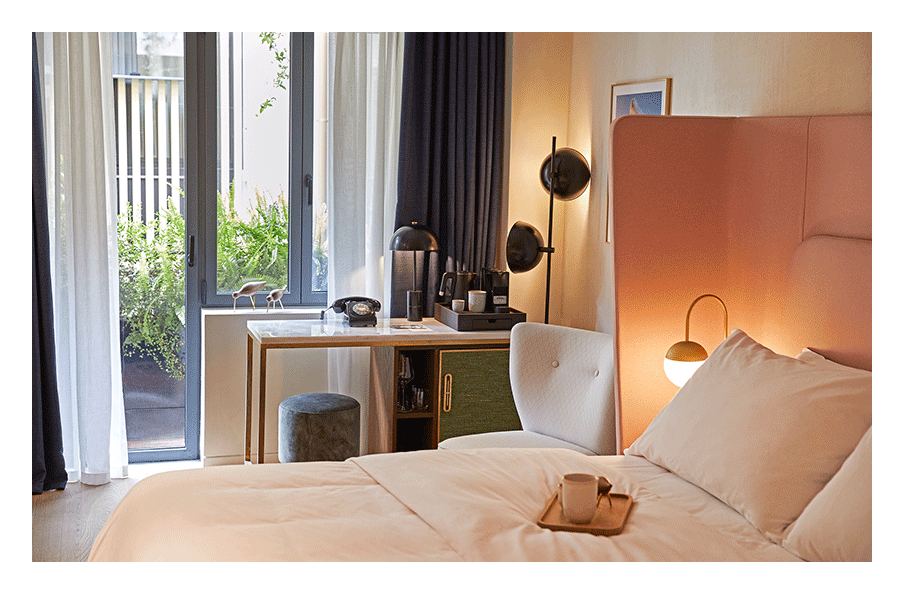 We embark on a very different tour the following morning, after a much-needed lie-in and a delicious breakfast of avocado and eggs on toast. This time, it’s Vassia’s turn to guide us through the pretty streets, all the way up to the Acropolis (with one swift detour into a tiny Byzantine church, incongruously positioned in the main shopping district). We learn all about the Theatre of Dionysus and take hundreds of photos of the Temple of Athena Nike and, of course, the Parthenon. Standing in the shade of these ancient buildings, the myths Vassia is retelling seem to spring to life – stories about Gods and Heroes, like main man Zeus; Athena, Goddess of Wisdom and protector of Athens; Poseidon, God of the Sea; and Dionysus, God of Wine (of whom I am a big fan).

It’s quite a climb up to and then around the Acropolis, so it’s with some relief that our next stop is for lunch. A noisy fish market is not quite the al fresco location we are expecting, but Hasapika, a Peruvian-Japanese restaurant, is not your average experience. With huge platters of sushi, massive plates of crayfish ravioli, and jugs of crisp white wine that seem to magically refill themselves, it’s a wonder we’re not still there now. Run by three friends who look like they should be on stage with The Foo Fighters, it’s a unique find and well worth a visit. 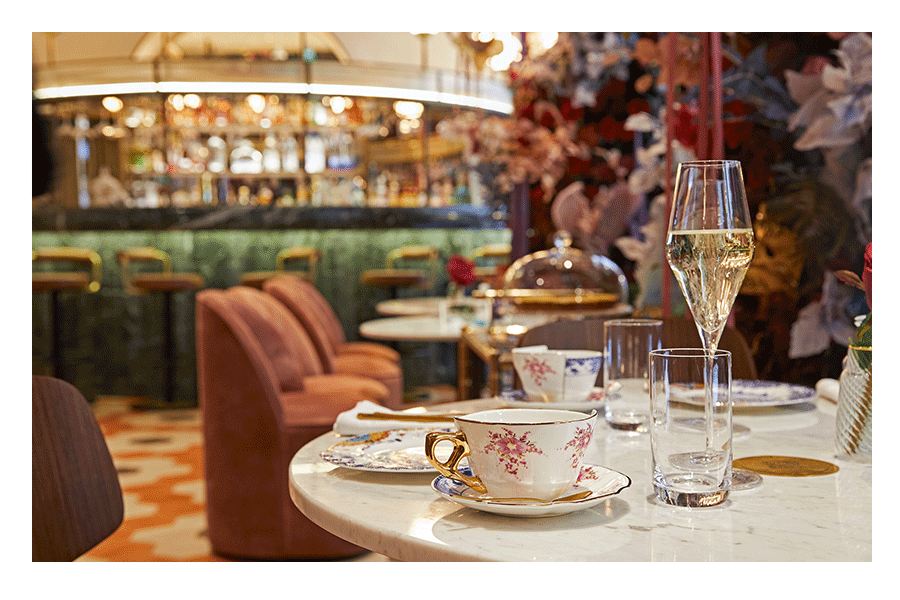 One much-needed siesta later and we’re off out again – whoever said New York is the city that never sleeps has clearly never been to Athens. We start in an elegant manner, with cocktails on Cloud 9, Gatsby’s pretty roof terrace, which is complete with comfy sofas, views of the Acropolis and an open fire. By contrast, a few hours later we find ourselves stage-side, inches away from a crazy cabaret of scantily clad dancers in a club called The Box. Their famous Bouzoukia experience offers modern Greek music mixed with impressive light shows and some very interestingly dressed dancers: apparently a typically Athenian Friday night. I stagger through until 2am, discovering the next morning that our Greek hosts left at 6am and yet still look remarkably chipper at breakfast!

We take advantage of the hotel’s free car service and pay a visit to the nearby Stavros Niarchos Foundation Cultural Centre. Newly constructed and bringing life to a previously neglected area, it’s home to The Greek National Opera and the National Library, and enjoys one of the largest green spaces in Athens. It’s well worth a visit for the spectacular views and the chance to hire a bike, or to sit and watch the impressive fountain displays. Afterwards, we pop up the road for a spot of envious yacht-spotting at Flisvos Marina, before finding ourselves medicating our sore heads with piña coladas at Bolivar Beach Bar, whilst dipping our toes into the Med. Dinner that evening is at Birdman – a Japanese grill serving outstandingly good yakitori and dry-aged yakiniku-style meats cooked in an open kitchen on a robata grill. The Iberico pulled pork sando is so good that I’d fly back to Athens in a heartbeat to try it again.

Back at base, a small issue with my previous room sees me upgraded to the ‘party suite’. Situated next door to the roof-top bar, it boasts a hot tub on its private terrace (and partition doors that can be opened if you want to hire out Cloud 9 and throw a party). All the rooms at Gatsby have one common feature: a mystery ‘dare’ button. Entirely fitting with the hotel’s hedonistic vibe and the seductive photography and artwork on display, it is a unique quirk that adds a little intrigue to the stay. On this, the last night, I pluck up the courage to press the button. What happened, you ask? You’ll have to book a stay and try for yourself if you really want to know…

It is with some regret that we descend to breakfast for the very last time the next morning. The warm and personal service is so attentive that our orders have been remembered from previous days, although I slightly confuse matters by deciding to mix things up and treat myself to a huge stack of fluffy pancakes piled high with blueberries and drenched in maple syrup. The Gatsby has been absolutely perfect – cool and quirky, yet with classical elegance and old school values. Add to that an envious location, glorious rooms, and delicious food and drinks, and it is an absolute must for any Athens trip. Go on, press that button.