As excitement levels build in the run- up to our trip, evenings are spent obsessively researching the island of Corsica, hoping to absorb, as if by osmosis, something of the spirit of the place before we have so much as left for the airport. And yet, she remains (as one might claim of all the classiest French ladies) something of an enigma. Sure, the history – an inviting French/ Italian heritage, the birthplace of Napoleon – is readily available, and the images we pore over show a Mediterranean idyll to rival any other. But, like it or not, we are going to have to wait to be properly introduced before getting under the skin of the place, and so we vow that this will be a holiday with exploration and discovery at the top of our list. 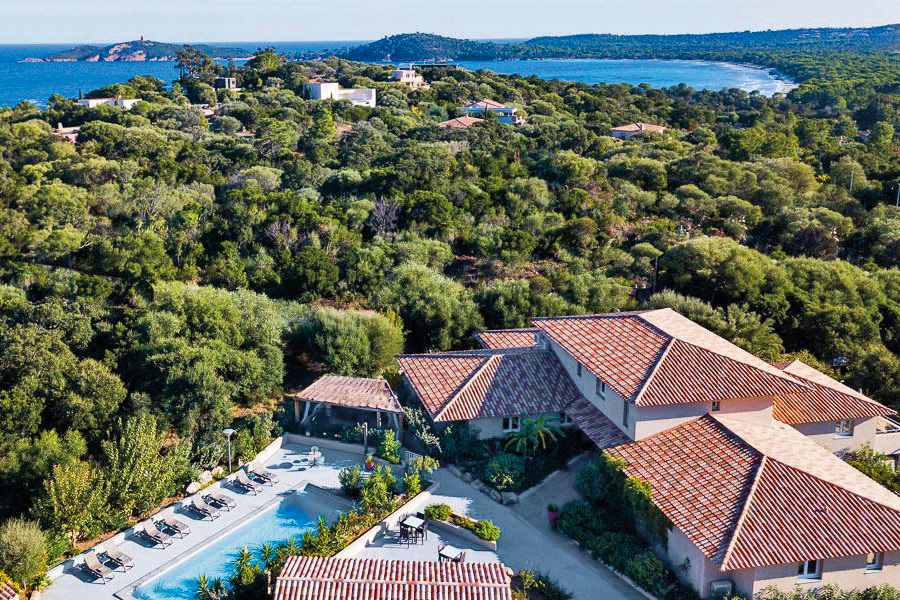 As every explorer knows, getting base camp right is the first step on the path to adventure. Simpson Travel, whose portfolio now takes in six countries, and only the best destinations within them, are our first port of call. Intrepid as we may intend to be, having the requisite home comforts is never less than a must, especially when travelling with a family. They suggest we base ourselves at Alto di Pinarello, a charming apartment complex in the south- east of the island that is part of the acclaimed Simpson Kids programme. The village of Pinarello, with its cluster of beach front restaurants, lies just a 10 minute stroll away, with the loftier sophistication of Porto-Vecchio – perfect for people-watching while aperitif- sipping – is within a 30 minute drive, all set along a coast abundant in beaches and coves of azure waters and shaded by pine trees. And so, with a wealth of other day trip suggestions both cultural and geographical in our clutches, we set off. 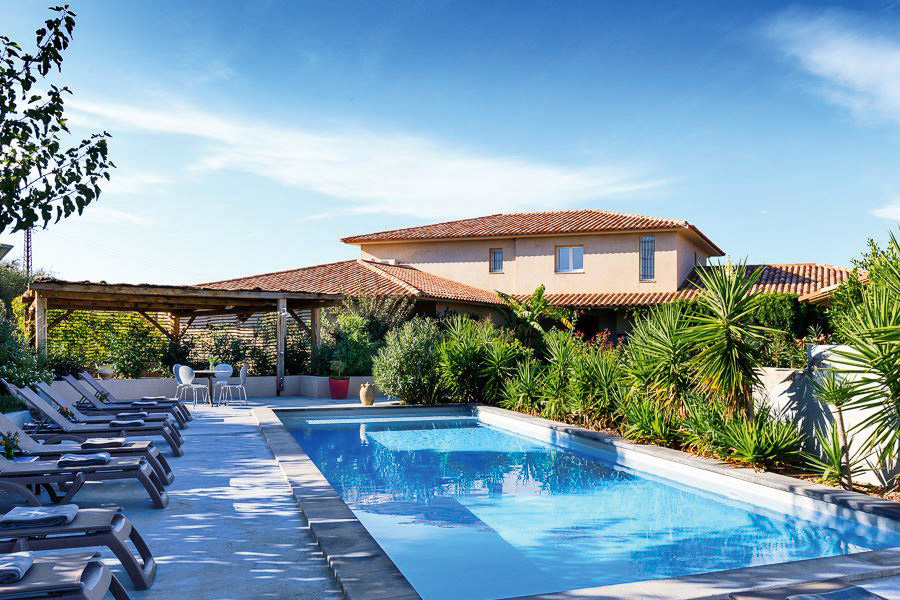 Of course, as any family knows, children, and toddlers especially, laugh in the face of the best-laid plans, and so it is that we find ourselves more or less housebound for the first few days, beset by a lurgy that puts paid to our dreams of following the path less travelled. It does, however, entirely vindicate our decision to opt for self-catering; not only have we settled in to our ‘home from home’ more or less instantly, with its well thought out provision of everything we might need, the apartment itself is spacious and stylish, with a well-stocked book- and DVD-library. We take it in turns to take a break, lolloping around in the welcome relief of the pool area, and thanks to a kindly local doctor, and some weapons-grade antibiotics, we are soon up and running again. 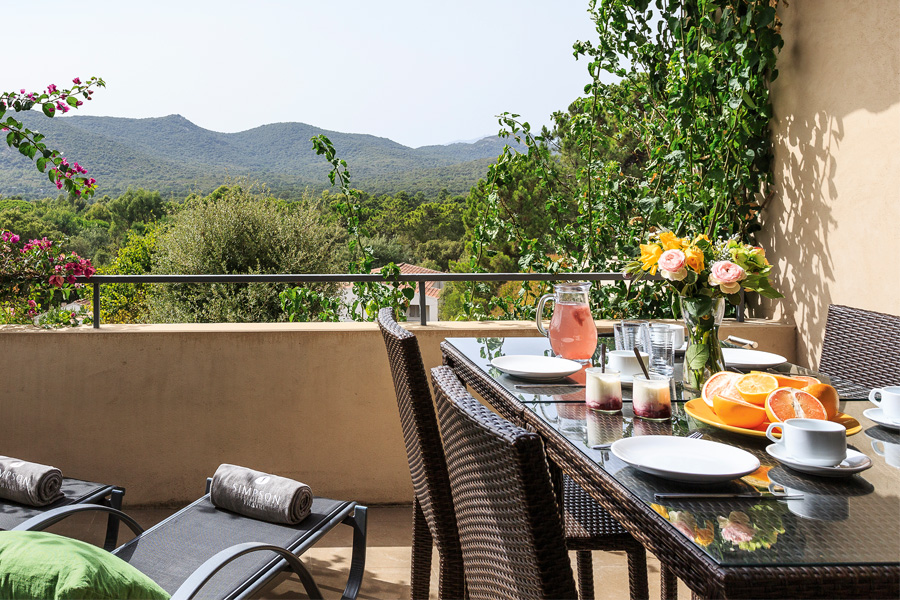 And so, finally, we get to meet her. Having spent the first couple of evenings gazing enviously out at the sun setting over the craggy ranges visible from our capacious terrace, we are itching to get on the road and see them for ourselves. We immediately break our own holiday rule of not doing the same thing twice when, on our Simpson rep’s recommendation, we make the trip high up into them there hills to visit the rock pools of the Cavu river. With temperatures soaring, the cool emerald depths that await us are more than worth the uphill voyage to get there; vast flat rocks lead out onto pools just perfect for swimming in, ridiculously picturesque when punctuated at intervals by waterfalls of varying heights and surrounded by towering pine forests. River swimming is a new venture for me, if not for my more outdoors-y other half, and I am hooked.

Of course, this doesn’t mean I am by now above your more common-or-garden beach swimming – far from it, in fact, when the beaches are of this calibre. Palombaggia beach, just a 15 minute drive from our complex, is prized for its pristine white sands and crystal clear waters, and provides those essential #nofilter pictures to really annoy the folks back home – it really is as stunning in real life as the images (which we’d assumed to be somewhat tweaked) we’d been drooling over back in Blighty. And although Palombaggia is the most well-known, we find equally drool- worthy spots at every turn, discovered by taking the road less travelled and seeing what is at the end of it. 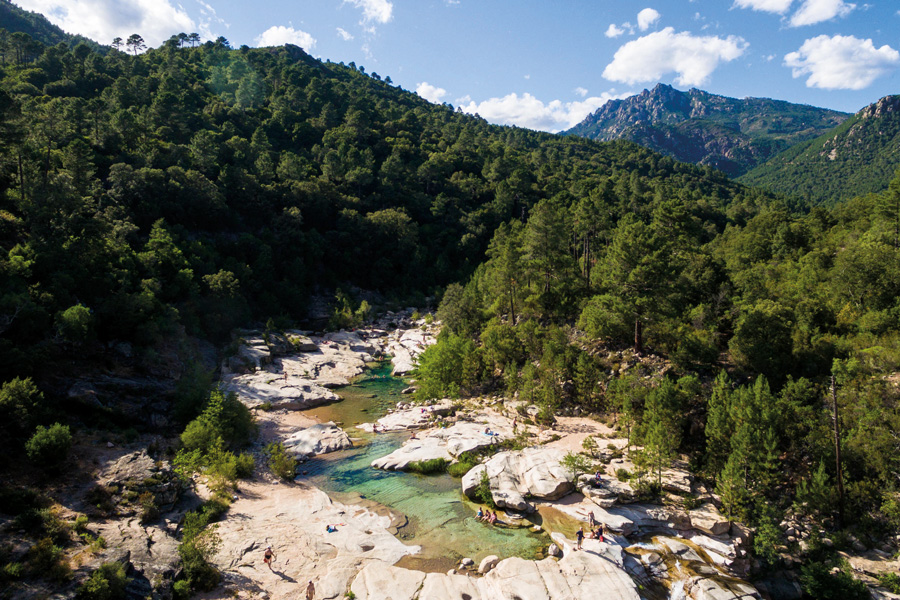 Naturally, in a cultural hotspot like Corsica, there is land-based exploring to be covered as well. Our favourite is a boat trip skirting around the fringe of Bonifacio’s old town, teetering on a cliff’s edge, then taking the quaint tourist train up its winding, narrow streets to the top, where we pick our way through the maze of cobbled streets, getting gloriously lost and picking up a few souvenirs along the way. We stand at the top of the King of Aragon’s Stairway, with its 187 steps which, according to legend, were carved by hand overnight by the King’s troops, back in 1420 – and while the prospect of descending them is appealing, the prospect of a seriously delectable local ice cream proves even more so. Maybe next time.

It turns out that the enigmatic ‘thing’ about Corsica, which had made it so indefinable from afar, is the way it manages to mix the best elements of so many European holidays. The majestic, wild scenery of our favourite Mediterranean islands; the superior roads and classy supermarchés so beloved of our French trips; the cultural depth and breadth borne of its Italian heritage; and a local cuisine both totally unique, yet cherry-picking the best elements of its Franco-Italian parents. So, despite an inauspicious start, we are totally beguiled by this mystery woman who – as do all the best of her kind – contains multitudes.

Fabric travelled to Corsica with independent villa and boutique hotel specialists Simpson Travel, staying at Alto di Pinarello. Prices for a week’s holiday start at £524 per person based on two adults and one child travelling in May 2020 including flights, 7-nights’ accommodation (self-catering) and car hire (020 8108 4545; simpsontravel.com).