Fly to the Côte d’Azur for lunch and be back in London for a nightcap.

“Lunch in Nice by private jet” – now there’s a phrase that’s guaranteed to make even the most seasoned traveller’s heart beat a little faster. And I must confess that when I receive the invitation from private jet charter company PrivateFly, I can feel myself grinning from ear to ear.

And so it is, in a delightful flutter of anticipation, that I make my way to Luton Airport. It sounds unlikely, but the airport defined by budget flights, Lorraine Chase and 1970s Campari ads has a double life as the UK’s busiest hub for private jets.

Even before I step into the Signature Flight Support building (aka the private jet terminal), I’m aware that the experience is going to be something very special indeed. I’m greeted first by a doorman in full top-hatted livery, who wouldn’t look out of place outside a Mayfair hotel and then by a chic receptionist who checks my passport against the passenger list. The aura of discreet luxury continues inside the departure lounge, with its elegant grey décor and sumptuous sofas. We sit and chat with PrivateFly’s CEO, Adam Twidell, who explains that in spite of the luxurious surroundings private jet passengers usually spend very little time in the terminal – they can turn up 15 minutes before a flight, and walk straight onto the plane after going though passport control and security (which takes all of two minutes). 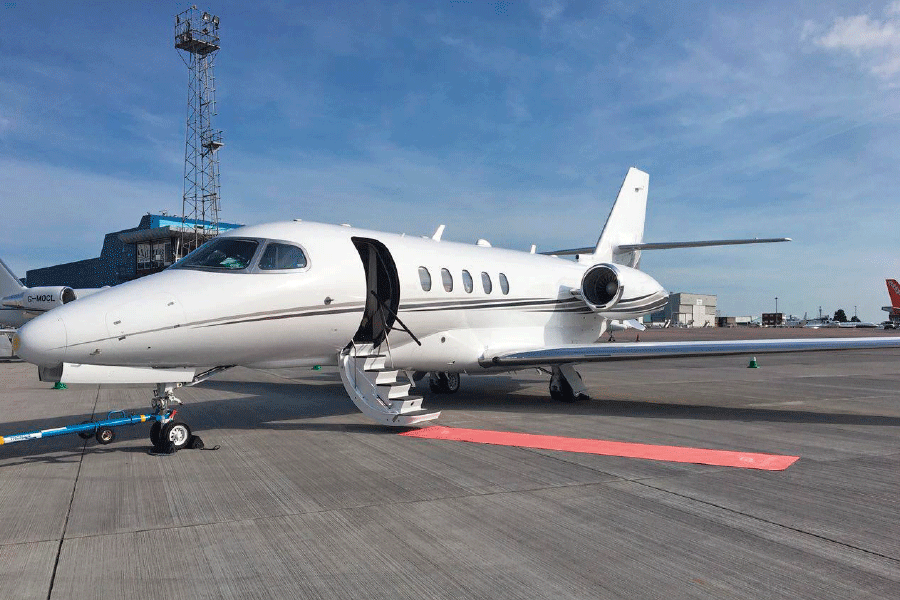 We are flying to Nice in a spanking new Cessna Citation Latitude eight-seater jet. Walking up the steps is a real red carpet moment (there is an actual red carpet on the tarmac!), so I channel my inner movie star and sit down as nonchalantly as a woman who is as excited as a six-year-old on her birthday can manage. The cabin is super luxe – white leather seats, highly polished mahogany tables, plush carpet. Adam remarks with amusement that I have opted for the ‘CEO seat’ – the one diagonally behind the pilot. Apparently it’s the automatic choice of captains of industry, who like to be able to make eye contact with the person flying the aircraft. There is a real thrill being able to see directly into the cockpit, where the pilot and co-pilot are making their last minute checks before we taxi onto the runway.

Even the most jaded flier can’t fail to be excited by the G-force you experience taking off in a small aircraft. We climb steeply through the lightest of cloud and within minutes are cruising comfortably. It’s time for a glass of Champagne – the first of many on what will prove to be a truly sybaritic day. This is what travelling in the golden age of aviation must have been like, when flying was about the thrill of being airborne, rather than the purgatorial experience it has since become. Having resisted the coffee and mini croissants in the terminal, I’m looking forward to breakfast – and it doesn’t disappoint. It appears in an elegant grey box containing a selection of fresh fruit, cheese and charcuterie with artisan bread. It’s a far cry from the flabby rolls and strange yoghurts that are the usual fare on an aircraft at this time of day. Adam is our flight attendant, serving food and topping up drinks, but he tells us that it’s usually the pilot or co-pilot who fulfils this role on most private flights (when the plane is on auto-pilot, of course). 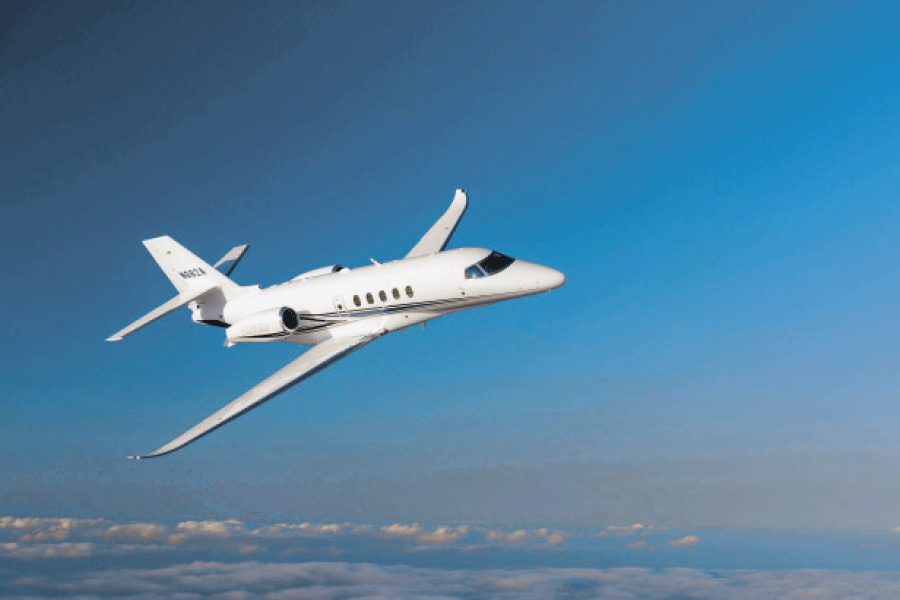 Our flight to Nice – just an hour and 45 minutes – passes very quickly and we prepare to land. The approach to the airport is one of the most scenic in the world – sweeping over the Alps and hugging the Côte d’Azur, before touching down on a runway that juts out into the Mediterranean. We’re met by a people carrier that takes us to another discreet terminal, passing dozens more private jets on the way. With an equally seamless passage through customs and passport control, we head off for lunch at Le Méridien on the Promenade des Anglais. Astonishingly, it’s only two-and-half hours since I arrived at the terminal in Luton.

Lunch takes place on La Terrasse, the hotel’s ninth floor restaurant with stunning sea views and a rooftop swimming pool. It’s hard to imagine a more quintessentially Riviera setting. The sun is out, so on go the hats, sunglasses and sun cream and we sip local rosé (what else) while we enjoy a four-course meal that showcases the fabulous local seafood. Over the meal Adam gives us a little background on PrivateFly. A former RAF pilot, “I flew Hercules, because I was too slow to be a fighter pilot,” he became a private jet pilot after he left the service. Spotting a gap in the market, he came up with the idea of a global booking platform for private jet charter that connects customers with 7,000 aircraft worldwide. “Time is the ultimate luxury,” Adam points out, “and private jet travel is incredibly efficient.” 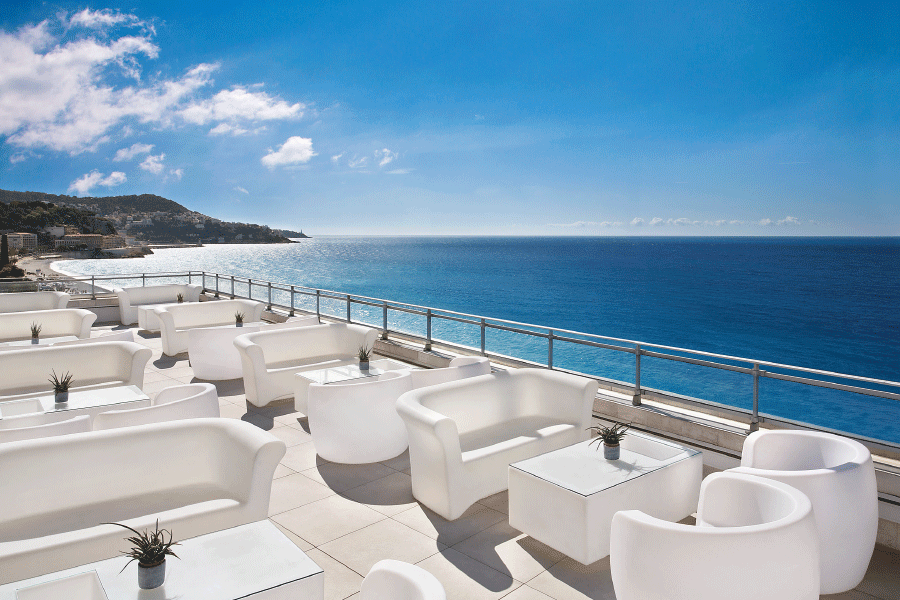 There are 2,000 airports you can fly to in Europe with a private jet, compared with 850 airports with scheduled flights, so it makes a much greater number of journeys possible. Plus, you have absolute privacy, which makes it attractive for business travel. However, the majority of customers are leisure travellers – some marking special occasions, others using private jets as a way of extending a holiday, or making a trip, such as ours to Nice, that wouldn’t be feasible using scheduled flights.

The afternoon is ours to do with as we please – sunbathe, swim in the pool or the sea, or wander around the town. I stroll down to the beach – it’s ferociously hot and I curse myself for not bringing my swimming costume. In search of shade, I make my way to the Old Town, with its elegant Belle Époque apartment buildings and narrow streets lined with chic independent shops. It’s a delightful way to while away a couple of hours.

On most trips, when the car arrives to take you to the airport for the return flight, the holiday spirit starts to ebb away. On this one, my spirits lift at the thought of another hour and 45 minutes of private jet flying time. More Champagne adds to the party mood, and there are more delicious nibbles to tempt us as we cruise through sunset skies before landing at Luton around 8pm.

There’s a dreamlike quality to the past 12 hours that have taken us to the Côte d’Azur and back in the most relaxed and comfortable way imaginable. If only travel were always like this…