From Times Square and Barcelona, to London and Monaco, yoga enthusiasts will be rolling out their mats on 21 June to celebrate the summer solstice, the longest day of the year. This is when the sun reaches its highest position, heralding the first day of summer in the Northern Hemisphere. Humans have celebrated the celestial event, which is associated with energy, transition and growth, throughout history. Nowadays, a multitude of public mindfulness events take place on what has officially been the International Day of Yoga since 2015. Here, we look at four but, wherever you may be in the world, forget the chaos of everyday life, calm your chattering mind and salute the sun.

Image by Amy Hart for the Times Square Alliance 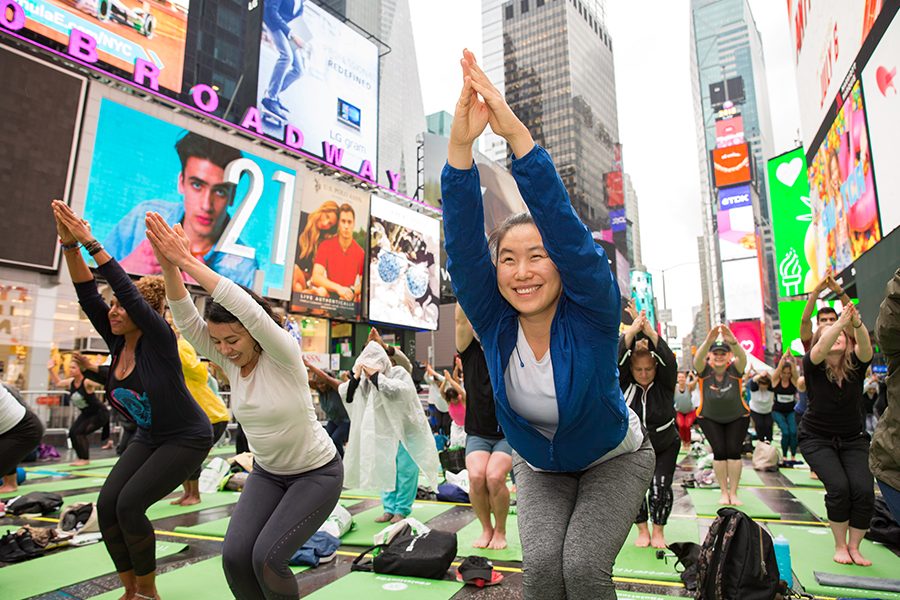 Bustling Times Square, with its flashing advertisements and screaming sirens, may not seem the most likely place to achieve harmony between the body and mind. Yet every year since 2003, thousands of yoga enthusiasts have headed there to celebrate the summer solstice. Free yoga classes take place throughout the day and participants have access to a Yoga Village on Broadway, between 44th and 45th streets, where the event’s sponsors sell their wares. 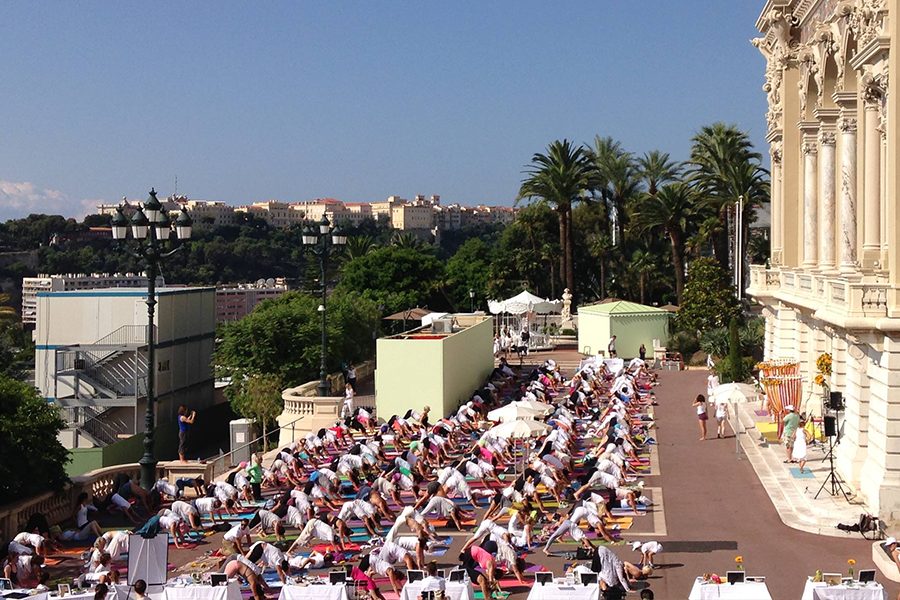 In Monaco, yoga fans from the Principality, the French Riviera and Italy celebrate summer solstice together on the terraces of one of the city-state’s most iconic buildings, the Monte Carlo Casino.

Live Indian music greets the hundreds of participants before the collective class begins, led by a group of alternating instructors. Seagulls soar above the fabulous setting between the lavishly ornamented facade of the casino and the Mediterranean sea.

If you’re considering moving to Monaco and miss out on this year’s summer solstice event, a property for rent in Monaco with a gym will help you prepare for the next gathering. 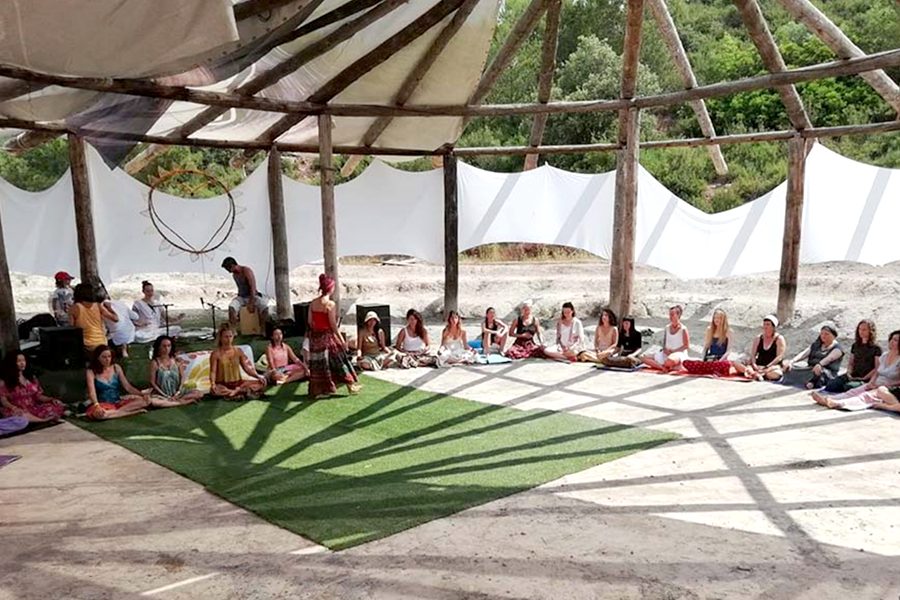 The Sun Love Yoga Solstice Fest is a five-day celebration of harmony and unity with numerous workshops and classes. There’s yoga, of course, with sessions devoted to Kundalini, Hatha and Virayoga (based on martial arts movements), but there’s a lot more.

The gong is a symbol of spirituality and its vibrations are considered to contain all the sounds of the universe. At this well-being fest, a 45-minute “gong bath” aims to take participants to a deep state of relaxation. Bowls, didgeridoos, drums, bansuris (Indian flutes) and gongs are among the ingredients of the “sound bath” sessions. Dancing, singing and chanting are also on the programme and a “conscious sexuality” workshop is a chance for men, women and couples to awaken the perfect lover in them through tantric breaths, meditation and music. 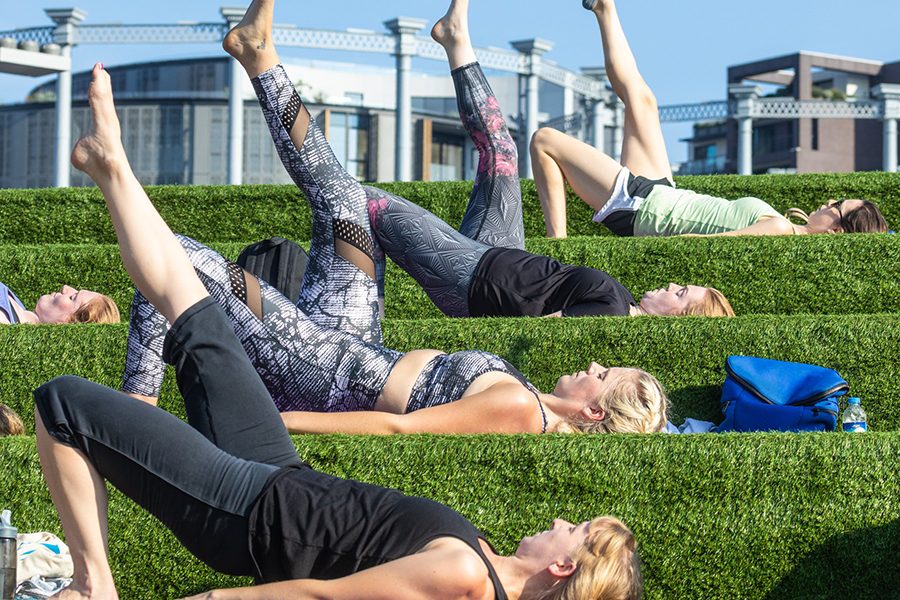 Gasholder N° 8, in the regenerated Kings Cross area of central London, is an ingenious example of urban recycling. The metal structure housing a park is the largest of several built in the 1850s to store gas for the surrounding area. It was in use until the 20th century, when it was dismantled and moved to its present location It’s within the 35-metre circumference of the former gas holder that the Californian mindfulness guru Michael James Wong will be giving a 90-minute yoga flow and guided meditation class.  Wong is on something of a mission to encourage men to take up yoga. He founded the Boys of Yoga movement and published a book, Sit Down, Be Quiet aimed at men considering taking to the mat. His summer solstice class is open to all. Tickets via Eventbrite cost £5 and all proceeds will go to the mental health charity MIND.

If you’re not able to sign up for these events in Times Square, Barcelona, London or Monaco, yoga gatherings on 21 June are being organised in many cities and are an opportunity to discover or rediscover this amazing meeting of body and mind. Namaste.