As Mayfair welcomes Gazelle, an exciting joint venture between master mixologist Tony Conigliaro and ex-El Bulli chef Rob Roy Cameron, we get seated with the dynamic duo just in time for the dress rehearsal.

London is experiencing an uncommon heatwave; the air is thick, the traffic is slow and Piccadilly is shimmering. Turning onto Albemarle Street I’m shown through the discreet door of an otherwise boarded-up façade. The decorators are still in and the paint fumes only add to the heady mix, but once inside the inner sanctum of this late-Georgian townhouse the glamour is palpable. Offering a fresh voice on the Mayfair scene, this is a destination bar as much as it is a restaurant, and the atmosphere’s already abuzz as finishing touches are put in place. There’s an undeniable heat surrounding these two and what they’re cooking up – and it has little to do with the 28 degree sunshine outside.

Tony had the name for Gazelle way before the physical realisation of the venue. Inspired by Truman Capote’s ‘swans’, the nickname given to the American writer’s inner circle of female friends, Tony wanted a similar animal muse for the project’s moniker, but one which perhaps didn’t scream ‘London pub’. “I was looking out for a name that symbolised that same kind of elegance and femininity,” he says. “Someone mentioned a gazelle and I thought, what a great image that paints, and so it kind of stuck.”

The space was designed with long-time collaborator Shaun Clarkson and is everything you’d expect from a chic Mayfair eatery that exudes old Hollywood glamour – there’s no doubt Jay Gatsby would approve of this interior. It’s very ‘fashion’, too, from the flashy gold and fandango-pink walls to the gilded gazelle horn door handles; the stylish pendants and chandeliers to the plush, cream hide seating. “We took inspiration from fashion designers like Haider Ackermann,” Tony confirms, “his use of colours and textures and satins and silks… We wanted to do something bold and joyous, full of life and uplifting.”

Gazelle offers a day-to-night concept that’s reflected in both the décor and the menu. Lunch and dinner will be served on the lower floor with its rich, golden glow before evening drinks and snacks take over in the moodier velvety surrounds of the upstairs bar. But there’ll be no clocking off for the El Bulli alumnus and his team. In fact, for Rob, this is where the fun really begins with wholly creative pairings. Placing food and drink on an equal footing is indeed Gazelle’s raison d’être and I wonder if there’s a distinctly Spanish influence at play here. “It’s an evolution,” says Rob. “There’s always been this separation between bartenders and chefs but it’s starting to come together. At El Bulli in the late ’90s they were doing cocktails as part of the dish and the menu. I think it’s changing now in London, there are more bars having chefs help out or advise, or they’re having chefs do food. It’s going in a good direction.”

Working with the food menu is an entirely comfortable arrangement for East London’s cocktail king, too: “I’ve worked a lot with restaurants so there was always a big connection with food,” says Tony. “I was one of the first bartenders to really work with chefs so for me it’s a logical extension to kind of explore the dynamic that happens between kitchen and bar, which is obviously very different to when we first started out.” 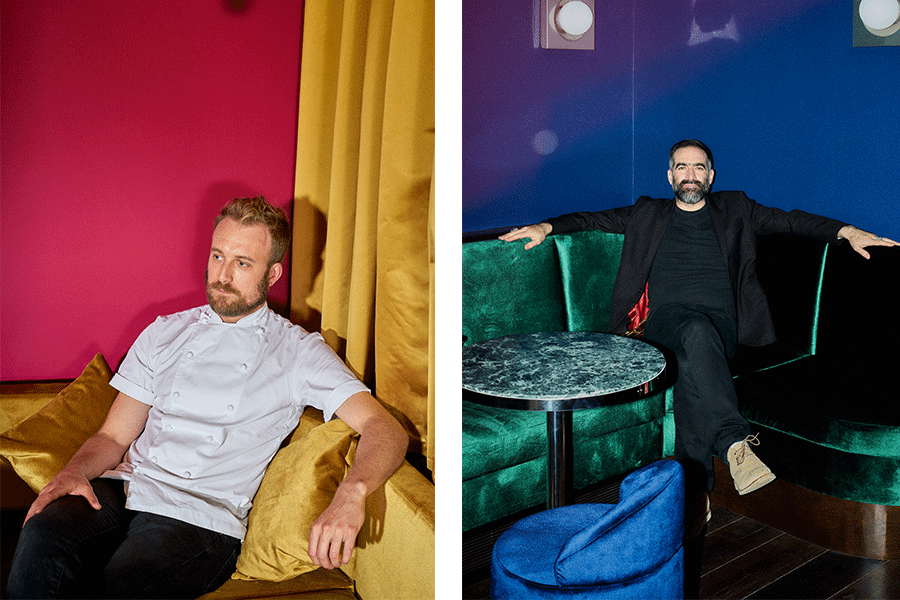 Serving up modern European cuisine with global influences, I’m keen to find out what flavours we can expect but I’ll have to wait until the opening to get a true taste. Nevertheless, I’m salivating on words alone: “At the moment we’ve got the cured halibut with activated charcoal and citrus,” reveals Rob. “The menu’s going to evolve a lot. It’s been really fun going to the lab and seeing all the by products, all the things they’re not using that we can use in the kitchen: spices that they infuse and then don’t need afterwards – maybe it takes off a bitterness that it originally had, or it’s slightly sweeter, or it changes the flavour a bit… We go once a week and have a rummage through the cupboards. It’s been really interesting!”

For Tony on the drinks side, that process of painstaking research has proved equally fruitful: “We’ve looked a lot at our top drinks that we’ve had at our other venues and just really pushed them to that next level, you know, things that people will recognise but also newer drinks based around what Rob’s been doing with the food,” he tells me. “We’ve got a really strong non-alcoholic offering as well, it’s really refined, more refined than we’ve ever done, so that’s exciting.” But I’m told it’s their comprehensive Champagne cocktail list that’s really set to sparkle – and to set Gazelle apart from all the rest: “We were scratching our heads and couldn’t think of anywhere around the world that does a really good Champagne cocktail list. That was a major focus for us and obviously that’s wine-based as such, which ties in nicely with the food.”

Gazelle’s location could not be more perfect – a cultural and foodie hotspot bang in the centre of town. But it wasn’t so much that Rob and Tony chose Mayfair, rather Mayfair chose them: the pair were headhunted by the current landlord. “It was a really great opportunity, they really liked what we do and wanted us to be part of the growing community they’re curating on this street,” Tony explains. “You’ve got some really great places all the way down, you’ve got the refurb of Browns and so on, so there’s a lot going on. It’s becoming like a whole-street destination.”

I wonder what kind of clientele they’ll be expecting, given Gazelle’s glitzy coordinates. “We’re going to get people who live in Mayfair but being so central I think we’ll get people from all over,” enthuses Rob. “I think because of the style of the project it’s going to draw a mix that’s a bit different from the usual Mayfair crowd.” Tony agrees, telling me that they looked specifically at what was missing in the area and tried to deduce what people really wanted from a new opening here. A host of interesting collaborators, including New York photographer Zackery Michael, whose work will adorn the walls, will no doubt attract a fashion-savvy footfall. “I think some of the younger crowd are looking for something a bit more fun, but in a stylish way, not classic Mayfair. That’s being diplomatic,” Tony laughs, “a bit more bohemian.”

The drinks man sums it up best when he tells me: “There’s space for something fresh.” And if anyone’s tuned into the zeitgeist of modern Mayfair, it’s this creative duo. “We both, separately, came to the same conclusion, which is about the flavours, purely ingredient-based, flavour-based stuff,” Tony continues. “There’s a Leonardo da Vinci quote, ‘simplicity is the greatest sophistication’ – it’s really hard to make things that are really simple, but are excellent. You can do all these flashy things, but to be really precise and simple, and have a really beautiful dish, or a beautiful drink, takes a hell of a lot more effort and knowledge.” I don’t doubt it. I don’t doubt, either, that Gazelle will fulfil its potential as one of the Capital’s hottest tables, and soon. “It’ll evolve,” says Tony. “I think there’ll be some really interesting things that’ll come out with the collaboration between the drinks and the food, we’re just looking forward to welcoming everyone down.”