Actor Josh Whitehouse talks about the different ways he expresses his creativity.

Can’t place the face? That wouldn’t come as a surprise to Josh Whitehouse. “I don’t get recognised at all; I think I just often look very different,” he explains. “And I am quite happy about that. I like being incognito!” Chances are you’ll know of him, though. Just last month he appeared as Liam, the lead role in the film Modern Life is Rubbish, but he is probably most recognisable as Hugh Armitage in the BBC’s adaptation of Winston Graham’s epic saga, Poldark, which returns for a fourth series this month.

And that’s just the tip of the iceberg for this talented 28-year-old, who also plays in a band called More Like Trees, stars in the Mr Burberry advertising campaign and draws in his spare time. “At one point I was having a sort of crisis about what I could call myself, I think I came to the conclusion that artist kind of covered it,” he laughs.

So how did it all come about? “Quite organically,” he assures me. At age 19 he moved to London to pursue his musical ambitions: “Music is my first love, I have always had it in my sights that I wanted to make music,” he explains. He was model scouted at a gig and ended up appearing in a campaign for Jack Wills, shot by Elaine Constantine. The photographer consequently invited him to take some dance lessons, with a view to appearing as an extra in a film she was making. “She must’ve seen something in me because she started testing out my acting skills and sending me to meet people. And she essentially trained me up to play one of the lead roles in Northern Soul.”

Off the back of that job, Josh signed with United Agents and other roles started to come in. “It all happened quite naturally, although the process to me was one of the most unnatural things in the whole world,” Josh admits. “It was all so new to me, and it was very difficult to get my head around how you learn lines, and how things are done. There were a lot of challenges…” 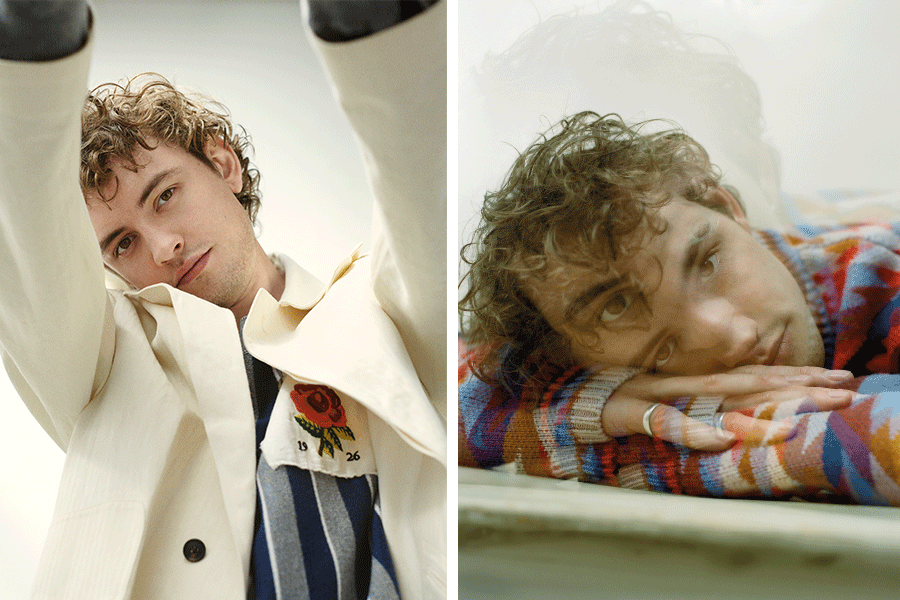 The fact that he has never had any official acting training doesn’t seem to be holding Josh back, though. He was put forward for the Poldark role by Demelza herself: “I met Eleanor Tomlinson, when I was working on a film called Alleycats,” he explains. “I was playing her brother and we really got along. She liked what I did, and she put me forward for the role of Hugh Armitage.”

Josh was excited by the opportunity to appear in such an established show, in what was to be his first proper television role. And the character appealed. Speaking previously of Hugh, he has said: “I really feel like I can relate… he is into the arts and literature and is a genuine romantic. Hugh refers to himself as an artist and I, myself am an artist, and like Hugh I also write poetry and music and so his interests are things we genuinely share.”

It quickly became apparent to Josh that his role was to be fairly pivotal, because as well as the arts, Hugh is also very much interested in Demelza. Indeed, series three ended with the pair sharing a steamy moment in the dunes. “I know that people don’t like it when Ross and Demelza are threatened,” he laughs. “But I was actually pleasantly surprised by the reaction I got from fans: I was expecting more hate mail! It is good that people were able to open their eyes to the possibility that Hugh is not such a bad guy. My aim with that character was to try to guide people to understand what he was going through, so that he didn’t come across as such a snake.” 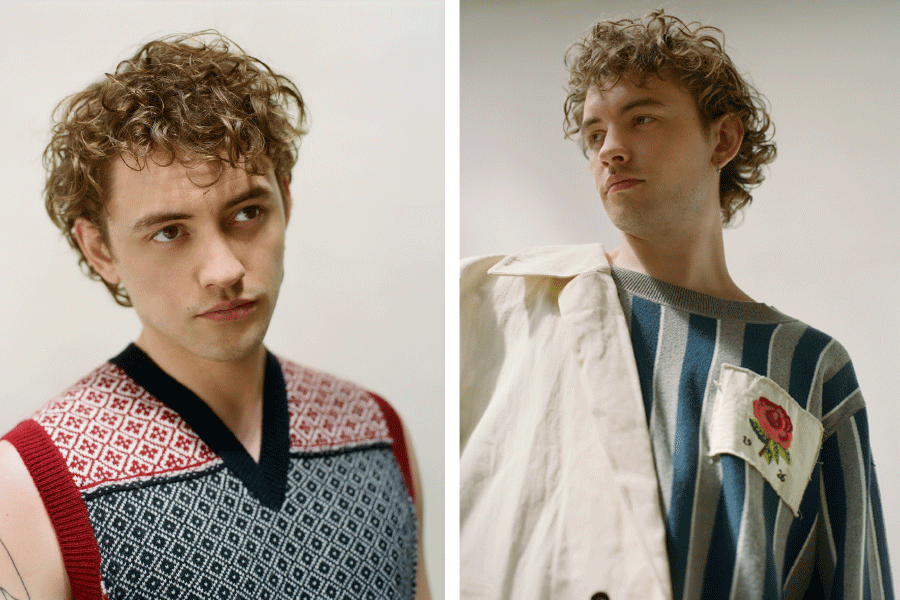 Those wondering whether there is a future for Demelza and Hugh will be disappointed. “I could only point people in the direction of the books if they want spoilers,” Josh tells me, adding that, “it is tricky for me to say too much about what happens to Hugh in this particular season, apart from that he is struggling with some health issues. And a broken, wounded heart…”

In contrast, Josh is on something of a high. Next up in terms of acting is a role he describes as: “probably the biggest thing I have ever done, film-wise.” He will be appearing in Rachel Goldenberg’s musical adaptation of the eighties film Valley Girl. “I play Randy. That was previously Nicolas Cage’s role, so I am very excited about that. And the fact that I have to fill those boots…” he tells me.

The film is now in post-production, though there’s no official release date as yet. “These sorts of things can take such a long time to come out,” Josh explains. “But I feel like, for me, this has been a year of things culminating. Everything seems to be happening now. And that is a really nice feeling. I have just got my head in scripts at the moment, trying to find the next thing to get my teeth stuck into, I suppose.”

That’s not to say that Josh is putting his feet up – he is seizing the opportunity to dedicate some time to his real passion project. “I spent a long time trying to be a musician in London and struggling to pay the rent,” he admits. “Now I see acting as my job. I mean, it is an amazing job to have, I love the process and I love being able to act in things when I get the chance. But since acting came in, music has sort of been sitting on the back burner a bit. It will always be what I come back to after work, though.” 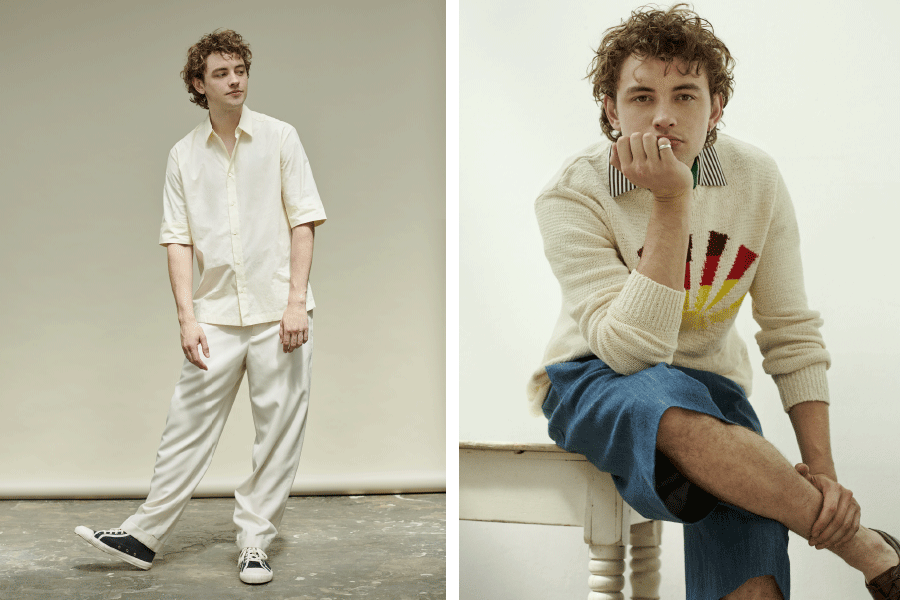 His band released their first album six or seven years ago, a sound Josh describes as “flamenco acoustic drum and bass.” Recently they have been working on 12 tracks for a second album. “They are currently with a producer in LA. So yeah, I am really excited to be able to show that to people. We would hope to be able to get a single out by this summer – June or July – and then the full album, maybe towards August.” And, excitingly, the band also have a couple of gigs lined up, including a festival in Switzerland later this year. “I’m always worried that if I book a gig, I’ll get an acting job, but I have been biting the bullet a bit more this year, because we barely played at all last year – and the band miss it and so do I,” Josh tells me.

He’s also working on another very personal project with his brother Tim. Together they are establishing a retreat in Portugal, a sanctuary that will inspire creativity and a place for artists to connect. “Basically I live in a property in London called The Hub, which is a creative warehouse we set up,” he explains. “We kind of wanted to create a similar thing abroad. And so we have purchased a property in Portugal and we are calling it The Hide. We are trying to be out there as much as possible, refurbishing the house.”

As idyllic as it sounds, The Hide will only ever be an escape for Josh, who will still spend the majority of his time right here in London. “People come here to work, and as somebody who likes to do their work, I like being in London,” he confirms. “I was always afraid that the big city would be too big for me, but I have felt so at home in London. I think it is because there is always so much going on. It is such a big place that you can go and do your own thing. And there are always options, and always a million people to meet. Whatever industry you are in or wherever it is that you are heading, you can tap into your network.” Something he is evidently very good at. Poldark returns to BBC1 later this month.