Ultimately, I like something that is complex. It is easy to just play one note and pull a face, but that, to me, is not acting,” Poppy Lee Friar explains when I ask what she looks for in a role. “To me, acting is about fleshing out a real human being – with flaws, and their own humour, and their own understanding of the world.”

It is a preference that is clearly reflected in the mix of work on Poppy’s CV – she made her name playing feisty, troubled teen Missy Booth in Channel 4’s critically-acclaimed Ackley Bridge, a portrayal that saw her receive a Best Actor award from the Royal Television Society.

Her latest role is similarly complex: Poppy stars as Mayella Ewell in Aaron Sorkin’s much touted adaptation of To Kill a Mockingbird, which is currently playing at the Gielgud Theatre. Directed by Bartlett Sher and starring Rafe Spall as Atticus Finch, it has been playing to sold out audiences since early March. 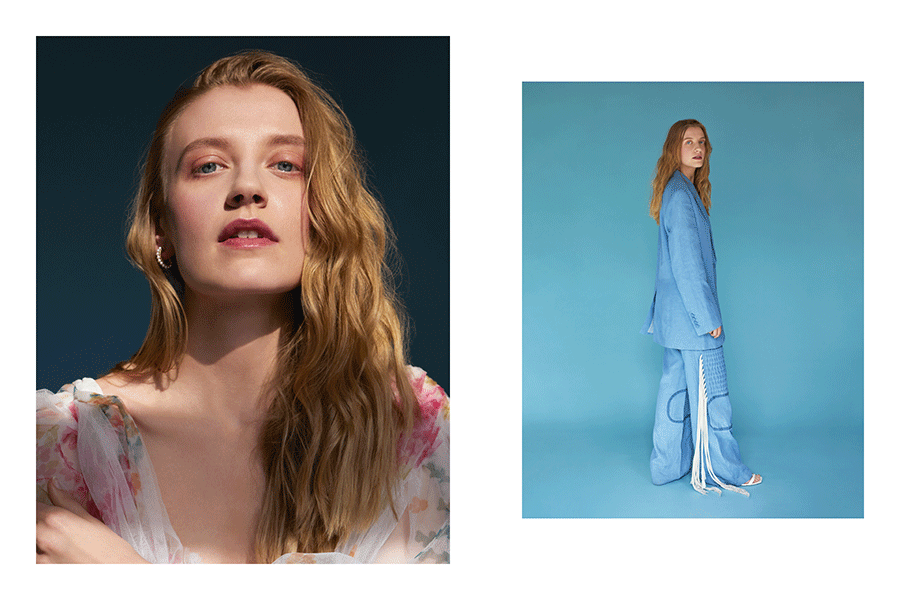 Those who have read the book will know that it is Mayella’s false accusation of rape that ultimately costs Tom his life. “I have to find something in Mayella that makes her human,” Poppy tells me, explaining how she approaches the work. “One of the things that I think is important to remember is that she is from such a horrible, deprived bubble within the bubble of Maycomb, and all she really wants is to be loved. She does terrible things… Ultimately, she is a villain because her actions are inexcusable. But there is something kind of beautiful about having such a torn personality – torn and broken, but still so human – to be able to investigate.”

It is a project that Poppy was thrilled to be asked to be a part of. “First of all, it is just a huge privilege to be in the theatre again,” she says. “Because of Covid and the state of things in the world generally, it is brilliant to be working at all, and to have a live audience.” Interestingly, though the Capital’s theatre scene may now have resumed, Covid has added a new dimension to the work. “We all obviously have understudies as usual, but now there is almost 100 per cent guarantee that they will go on,” Poppy explains. “We have had a few moments of rejigging already, and everybody has absolutely stepped up to the plate. I think that the understudies work harder than anybody – people are covering many different parts, but not only that, the heroes and the villains – roles that require them to inhabit completely different headspaces. So, kudos to understudies everywhere at the moment, because everybody is having to step up and it is just brilliant to watch.”

It was more than just the thrill of being back on stage that appealed to Poppy. “I am just so, so lucky and grateful to be involved,” she tells me. “Not just with the script and the book, but the production itself. The director Bartlett and Sonia Friedman Productions… it is truly an extraordinary experience. And we all feel it, and we are all very grateful.” 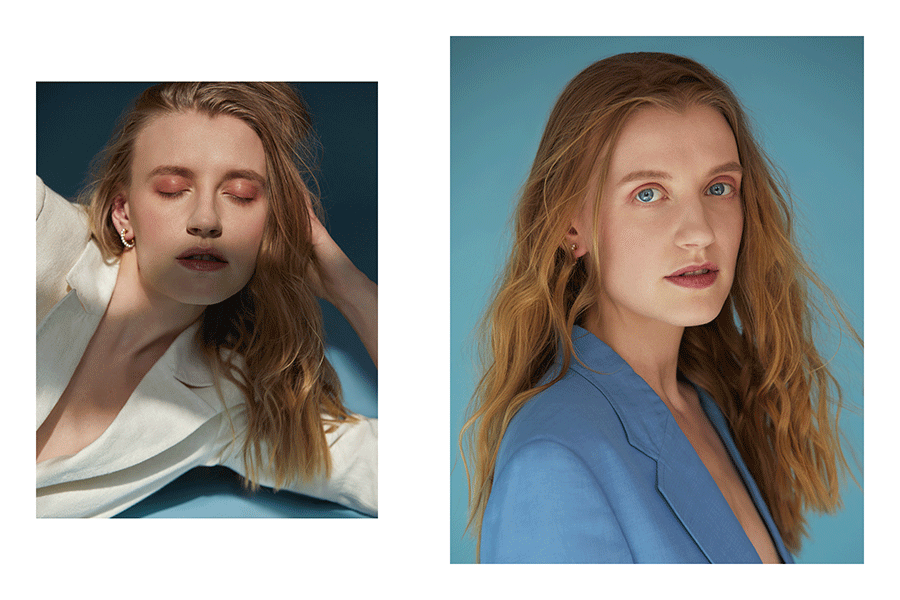 To Kill a Mockingbird’s story is an enduring one – the book has sold over 45 million copies worldwide, inspiring conversation and change in the fight for racial equality. “The book itself is so loved by so many. I have heard so many stories about how it moves people,” Poppy says. “I actually hadn’t read the book until the project came through to me,” she admits, “but when I did, I could immediately see why it is so special and moving and poignant, and why it still resonates today, perhaps even more so. Aaron’s version is actually slightly different, I think for the better for the world that we live in today.”

The retelling of such a story can’t be easy, I suggest. “It is long and there are lots of transitions, and it is heavy,” she agrees. “But it is so powerful and important that that carries you through. It is hard work, but it is interesting in the sense that we get a new audience every show, and what is so rewarding is to be able to feel the energy. Feel the impact of the message in those silences from the audience, or in the collective gasps that you might hear. It reminds you that, yes, we are all actors, we all love our jobs, we are ultimately there to serve the story and the people who we are playing, but this has a real human, global significance on people, and they will take away these messages that they receive – and hopefully hold on to those messages forever.”

What is Poppy hoping that the audience will take away from this production? “I think the ultimate message would be to understand that we all have to collectively fight for justice,” she suggests. “And that when we see injustices, we have to identify them, and we have to speak up. That is the only way that we are going to collectively change the world, because there is so much that needs to be done,” she concludes.

The themes of racism and injustice are echoed in the BBC adaptation of Kit de Waal’s My Name is Leon, due to screen later this year. The award-winning novel follows the story of a young mixed-race boy growing up in Birmingham around the time of the race riots; this special, one-off film has been written by Shola Amoo and directed by Lynette Linton, and stars Sir Lenny Henry CBE, who is also an executive producer. 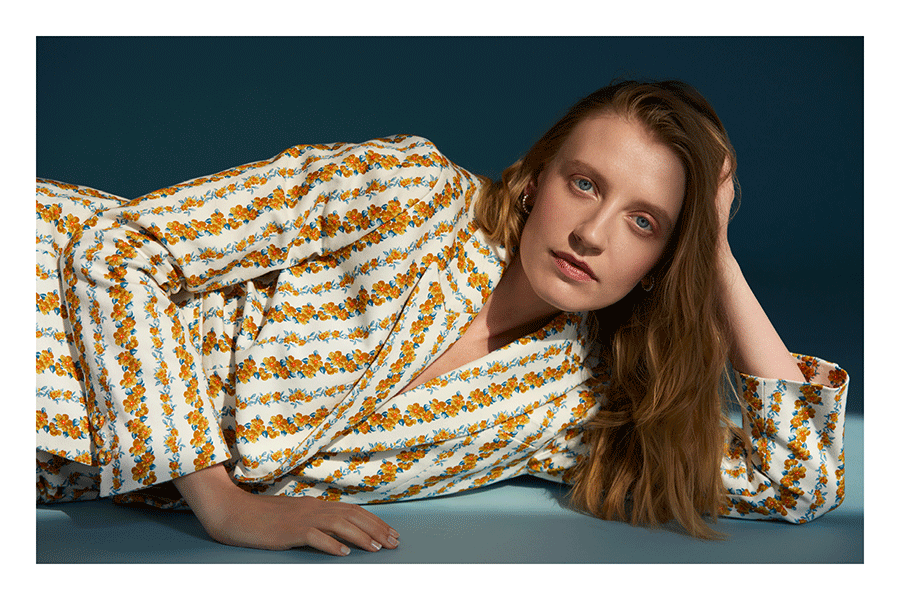 “I play a young single mum to two boys,” Poppy tells me. “One, Leon, who is mixed race – white and black – and I also have a young baby who is just white. My character suffers from postnatal depression, which wasn’t understood at the time in the way that it is now. So, she faces her own challenges within the system, and the boys get taken off her. The film follows Leon’s journey as he discovers who he is and what it means to be mixed race in a very white community.”

It was a compelling proposition for Poppy. “Everyone needs representation on screen, and sometimes you read something, and you think, yeah, this person is really out there, I feel like I want to do this person, or this community justice,” she reveals. “It is quite a harrowing story of how people are treated differently within our society. But at the same time, it is a very hopeful story: Leon begins his journey of self-discovery and there are lots of people who help him along the way. Ultimately, there are lessons to be learned about our history and the way that people are treated differently.”

This is not, sadly, an issue that has been consigned to history: it is over three decades on from the race riots and people are still being treated differently because of the colour of their skin. Something that Poppy says she is all too aware of at work. “I think one of the biggest lessons I have learnt, especially of late, is that being white in our industry is an enormous privilege,” she tells me. “Diversity is not where it needs to be. Now, more than ever, I realise that I have been exceptionally lucky by virtue of just being white, because so many white stories get told. And it is not lost on me that I get to work a lot because of what I look like. I have been fortunate to be part of stories that are particularly diverse, like Ackley Bridge, and like My Name is Leon, but there is still a really long way to go. Things are changing, but we need to keep our foot on the gas… .” 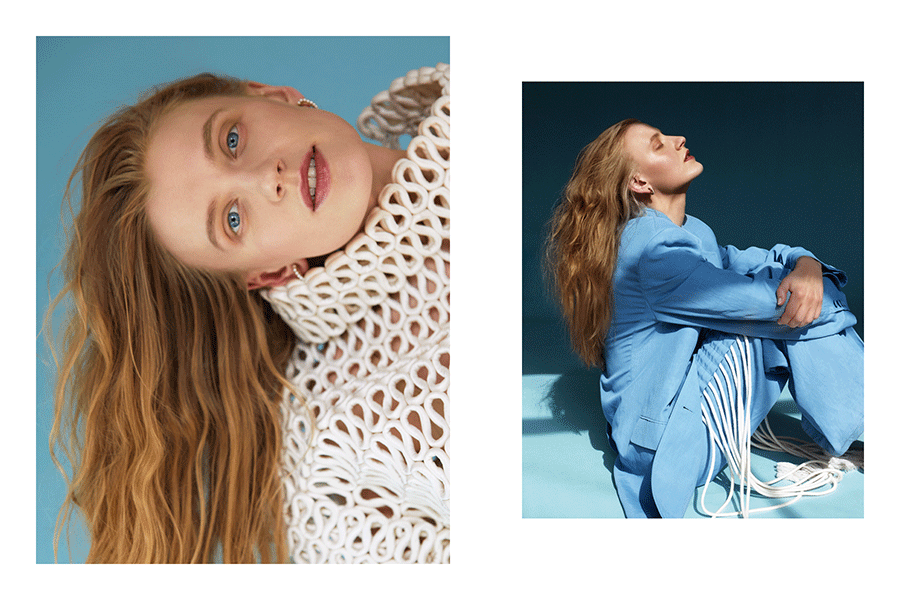 This need for representation goes for every marginalised group: “People don’t fit into boxes – we shouldn’t fit into boxes – there’s so many variations of person and everybody needs representation,” Poppy explains. “And it starts with opportunities for working class people, and every demographic that doesn’t get as many opportunities… .” Opportunities that extend to the consumption of culture, as well as its creation, she adds. “I love that in London we have good access to cheap theatre tickets (obviously there are very, very expensive ones), but it does seem to encourage people from all kinds of backgrounds and economic circumstances to enjoy the arts, which is obviously important to me.” This is just one indication that, for Poppy, London might be leading the way when it comes to embracing diversity. “I think living in London is a treat, it is extremely multicultural and diverse. People do their own thing, and are comfortable being different, and it is lovely to be around such individualism.”

It is a Monday, and as on every day except Sunday, Poppy is due at the theatre soon. As we wrap up our conversation, I ask if the demanding schedule is taking its toll. “I am well and truly into my routine, which is going to take up most of this year. But I am generally quite tired in my off time,” she laughs. “Obviously, it is an epic story that is very poignant and difficult, and also my character is not necessarily fun, but it is very rewarding. And I am just enjoying being in this fantastic production with the loveliest, most hardworking people.” It does sound rather special – now just to work out how to get hold of tickets.

To Kill a Mockingbird is currently taking booking until mid-November (tokillamockingbird.co.uk/tickets)