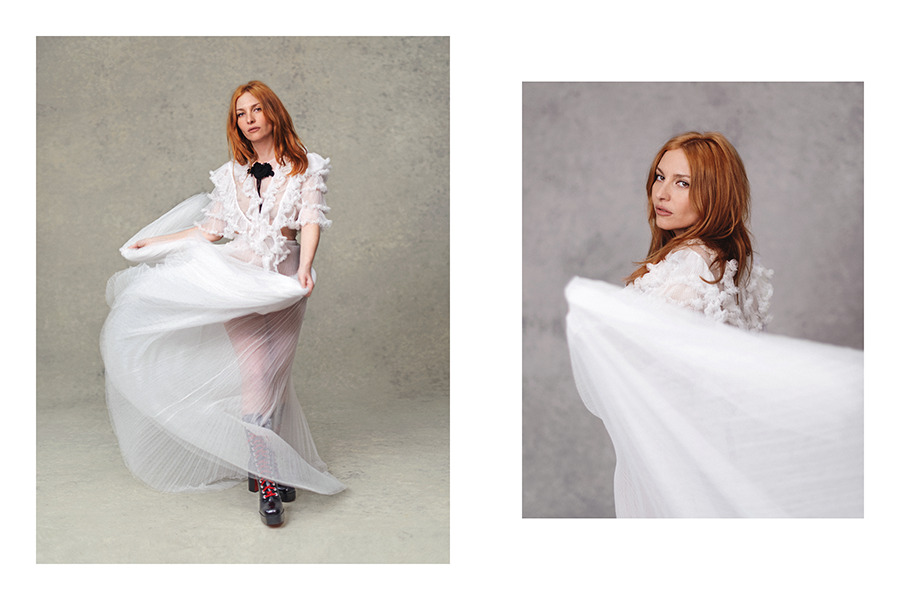 Joséphine de La Baume begins our interview with an apology. “This is my second language, and I’m like, am I being clear?” She explains. “So, I end up making things more complicated with long winded answers.” Of course, like so many Europeans, her English is impeccable. And her answers, it transpires, are perfectly pitched.

The French actress, musician, songwriter and film director grew up in Paris, but has lived in London for many years. “I love living in London, but I always miss Paris. Then, when I am in Paris, I also miss London, so I guess I am never satisfied,” she laughs. “One of the best things about London is Londoners – I just really like English people, they don’t take themselves so seriously, which is not the case in France. But I miss my grumpy French friends when I am away!”

Any homesickness is countered with regular trips back to Paris for work and to see family and friends – pandemic and Brexit notwithstanding. “Brexit is making things even more difficult! As if covid wasn’t enough…” she sighs. When she can, she manages to mix work and play, particularly when it comes to her music – along with her brother Alexandre she fronts achingly cool Parisian garage punk group Film Noir.

The band are releasing their second album this year, Joséphine tells me, explaining that recording happened in London last year, during “one of the many lockdowns”. The restrictions proved to be something of a blessing. “The band came over from Paris and had to isolate. And after that they didn’t leave the studio for 10 days or two weeks,” Joséphine recalls. “We were in a bubble, basically, all together, and it gave us a sense of urgency… frustration at times, which worked very well with the energy in some of the songs. And I think, also, we became almost one, in a way, being so on top of each other for so long. You can sense it in some songs, too, where it is quite ethereal.” Coupled with the fact that the band couldn’t go out in the evenings and enjoy the London nightlife, it proved the perfect environment for productivity. “That was beneficial,” Joséphine laughs. “We had to be disciplined!”

So, what can we expect from this latest work? “Each song is almost like a little novel about a character,” Joséphine suggests. “Sometimes it is cinematic, and sometimes it is a bit more mythological. They are basically heroes, or sometimes anti-heroes who are experiencing a moment of crisis. Or they are at a big turn in the road, a life changing moment. Sorry, my English is not doing it justice…” 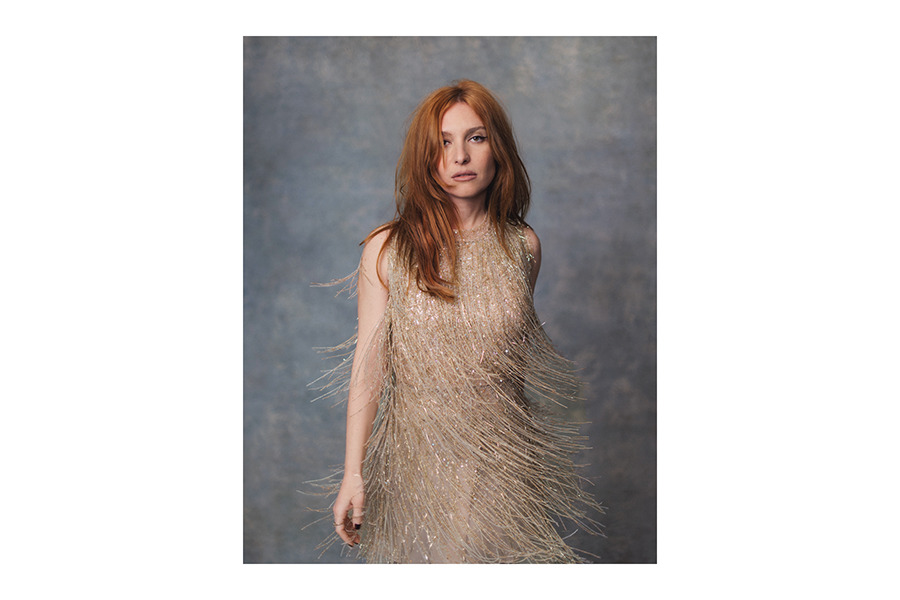 The album, which is due to be released in June, is being produced by Ben Romans-Hopcraft of cult British bands Insecure Men and Fat White Family, and is currently at the mixing stage. “We’re working with Orla Carey, who is a 17-year-old English girl,” Joséphine tells me. “She is incredible. I sometimes forget that she is so young, and then I get an email saying she has to go to school and that she will finish the mix in a few days, and I’m like: Oh gosh, she is 17! She is a prodigy.”

For Joséphine, songwriting is a cathartic experience. “I don’t really know how to not make it personal when I write music, because I do feel like it is a little bit of a diary – in the lyrics as well as in the music,” she explains. It helps, then, that she is working with somebody who knows her as well as Alexandre does. “We are very close and share a very deep understanding of each other. I’m not scared to show him my emotions. So, when we write together, I think it is very complementary, but it is also with great understanding of where the other one wants to go.”

That the music is so personal is perhaps why she finds it hard to listen to when others are around. “I could never sit and stare at somebody while they are listening to me rambling about my life. No, definitely, I can’t!” She states, emphatically. Fortunately, she has none of those concerns where live shows are concerned. “I love performing,” she exclaims. “I just came back from touring with La Femme, a French rock band, and that was really fun. You know, it is immediate, and it is a capsule in time. It’s not like a movie where you can just do another take, and another take, and another take. It is just right here, right now. And it is especially good when we have spent so much time away from one other, to suddenly be all together in one place having one experience. You don’t take it for granted anymore.”

There are more live shows to look forward to, Joséphine reveals. “We are opening for La Femme in London on the 21 April at the O2 Kentish Forum. And we are now scheduling another date, which will be just our show, around the same time in London. We will play a couple of shows here, and then we will play in France after that. We have festivals this summer as well.”

When Joséphine is not immersed in the world of music, she can invariably be found performing in front of the camera. And though acting and singing are quite different disciplines, they are very much complementary, she tells me. “The one thing they have in common is that you have to move away from the fear of being quite naked with your emotions. If you are not comfortable with that, it will be hard to give a truthful performance.” 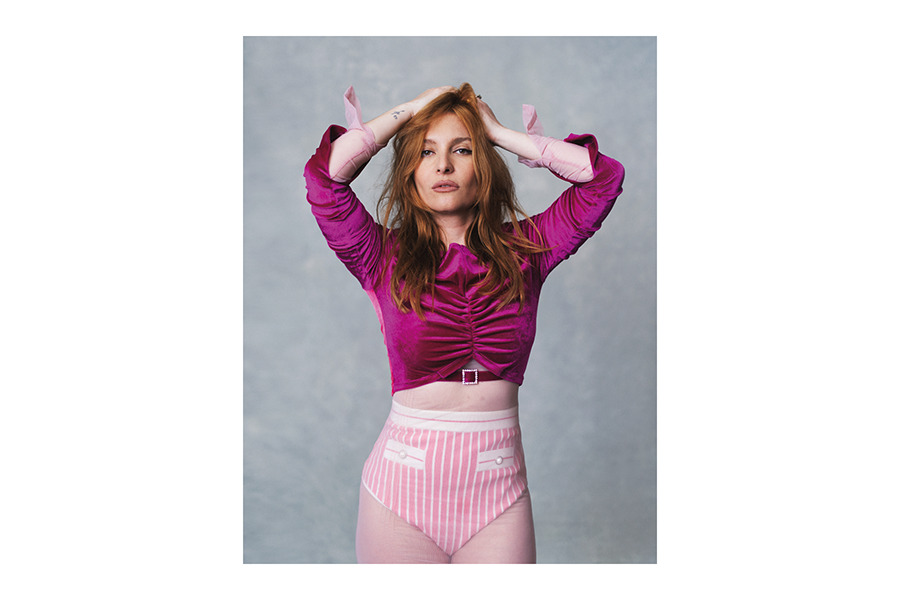 She can currently be seen in the long-awaited new series of Ronan Bennett’s gritty but riveting crime drama, Top Boy, which launched on Netflix in mid-March. It is a project she is excited to be involved with. “I watched all of the previous series. And then I watched them again before I started filming,” she tells me. “I love it and I feel very excited and honoured to be a part of it. The cast is incredible. Everything about it is exciting.”

At the time of our interview, the new episodes are still under embargo, so Joséphine is tasked with promoting the show without revealing anything about it, or, indeed, her own role. “I have to find ways of talking about it without revealing anything, which is a peculiar game!” She laughs. “What I can say is that my character has gone through very difficult life challenges, and she tries to channel it in a positive way. When people experience tragedies, they try to make sense of it. But often you just can’t. So, that was a very interesting thing to explore within a character.”

“My character is a very manipulative, quite evil woman, really,” Joséphine reveals. “It is always fun to play a villain, you know. It is also quite an interesting challenge to play somebody who does things on planet Earth that you would never imagine yourself capable of. In order to deliver an honest and genuine performance, you have to relate to that character one way or another. And it is sometimes really difficult to do that, because the character goes to places that are so horrible, or evil, that you couldn’t imagine how somebody could do something like that.” Joséphine does this by working on the backstory, she tells me. “You have to work out why they got there. How they got to that place. Maybe in there you can find something that you can relate to. You might not turn into the same person, but you might be able to understand what got them to this point. What level of desperation, or insecurity…” 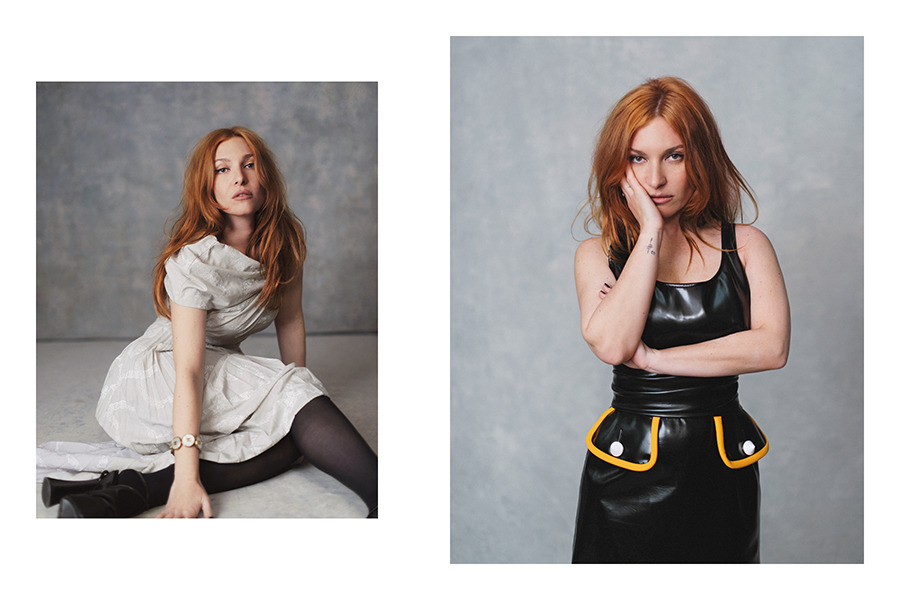 For Joséphine, this process involves interpreting the script to imagine the character’s entire life story. “We are a mixture of our traumas, our fears, our goals, but also the way we love, the way we were brought up, the way we experience life… That stays with you whatever happens,” she explains. “There will be elements in the script, and of course that is going to be part of it, but I always try to mentally recreate a character’s life story, retracing from childhood up to the point where they are now, so that when I arrive on set, I am pretty much immersed in the character’s life.”

The nature of filming means that this is important even with more straightforward characters. “It is difficult when you film, because it is never chronological. You are kind of cutting from one scene to another. Jumping from page one to page 10, and then coming back to page five all in one day,” she explains. “And you are going through a range of different emotions and events, and backtracking the past, so you have to know the emotional arc of the whole script, so that you can land on each scene knowing where you are at.”

With this knack for embellishing stories, it is no surprise to hear that Joséphine has been channelling her creativity to write her own scripts. “I started writing a TV show, which I am developing at the moment. I wrote a French feature, and I wrote a TV show in English, so I am developing those,” she reveals. “I find that the more I do, the more I want to do. I quite like being in a sort of work frenzy. I find that I almost clone myself, managing to do more and more. It is often the case that when you don’t have much to do, one thing can feel like a mountain, but when you are doing a lot, you manage to do much more than you thought you were capable of.” Indeed, she wouldn’t have it any other way, and we’re quite grateful for that.