Growing up, acting was all Hannah John-Kamen wanted to do – now she’s doing it, she pinches herself daily – she explains why the job is so empowering.

You might not recognise Hannah-John Kamen’s name, but the chances are you will know her face. The 32-year-old’s CV would be the envy of any actor; film roles in Star Wars: The Force Awakens; Tomb Raider; Ready Player One and Marvel movie Ant-Man and the Wasp. Plus, TV appearances in Black Mirror, Game of Thrones and 2020 Netflix hit, The Stranger, amongst others. And there’s more to come – next month sees her starring as Jill Valentine in Constantin Films’ Resident Evil: Welcome to Raccoon City, while Unwelcome, in which she stars opposite Douglas Booth, is set for release early next year. And it has been announced that she will be playing the title role in Millennium’s comic book fantasy hero feature Red Sonja. There was much to discuss when we sat down to chat.

We’ll be seeing you next in Resident Evil: Welcome to Raccoon City, can you tell us a little about the film and why you wanted to be involved? Well, it’s based on the hugely popular video game series: this adaptation is the story of how it all begins, and all I can say to fans of the game and genre is that it won’t disappoint! I think Johannes (Roberts, the director), has done an amazing job – it’s almost identical to the games, but with a retro twist. It’s set in the 90s, which was so exciting and nostalgic for me, because I’m a 90s kid. So, that appealed, plus I’m a fan of the games myself, and a big fan of zombie movies, so I was definitely nerding out on set. I just knew from the outset that I was going to have way too much fun with this project.

You’ve also got Unwelcome coming up in the new year, can you tell us about that? It’s definitely a juxtaposition from my role as Jill Valentine. Unwelcome is a story about a couple who go through a traumatic event and decide to start a new life in Ireland, but all is not as it seems, and the peace and quiet they were looking for and craving isn’t as easily found as they had hoped. It was a really different project for me – definitely not a role I have ever taken on before. It’s such a raw piece of work and I definitely let my imagination go – it was wonderful to really immerse myself and feel the freedom to allow my performance to go a distance that was unknown to me. Also, working alongside Douglas Booth was such a pleasure: there was a great and easy chemistry that flowed between us so naturally. Being in scenes with him felt like playing a game of ping pong – batting the energy back and forth – which was so fun. I’m really excited for this movie to come out and for everyone to see it. 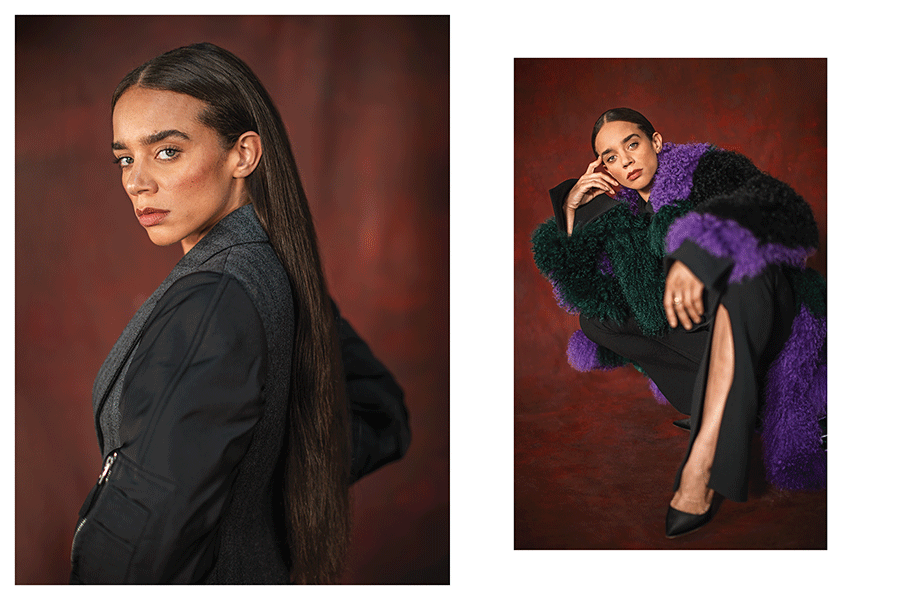 In other news, you’ve also been announced as Red Sonja – has work started on the film? It is such an honour to be able to talk about this now. I still can’t quite believe it! I really felt I connected with the script and what Red Sonja represents. All of the training and prep is underway: I find it’s always the most exciting part to be able to create, articulate, discover and explore who your character is, what they represent and how they came into being. This role really gave me the freedom to voice my own interpretation of Red Sonja, and when you have the opportunity to do that, you have to grab it by the horns.

You’ve made a name for yourself starring in fantasy roles – what is the appeal of this type of project? I think, for me it’s a reflection of my childhood and my imagination! I love, love, love fantasy because the possibilities are endless – I can really let go and explore or escape the laws of reality. Also, the hair, make up and costume possibilities are so much more elevated and creative – you can push boundaries that you wouldn’t get to do when portraying a character in a more mainstream genre. Don’t get me wrong, working in the real world is badass, too. I find that whether I’m working on a fantasy project, or one that’s grounded in reality, there’s always a discourse of politics, economy, hierarchy, currency… the same problems exist. So, themes are really important to me, as they enable you to tell stories, to interpret and perform.

Your CV is a real mix of film and TV, do you have a favourite medium, or do you think the difference between them is narrowing? I find film and TV are both different and similar at the same time. Filming a series, for example, you have more episodes to tell the story, so the formula of storytelling is different to that used in a two-hour film, where there has to be a definitive beginning, middle and end. I guess, for me they both have their pros and I haven’t really experienced any cons.

What attracted you to acting and what would you have done if not this? I can honestly say that I can’t ever remember a time where I didn’t want to act or perform. It’s ingrained in me, and growing up there was never any other option, because nothing else made me happy. I do what I do because it’s fun, it’s empowering, and it makes me feel alive. I pinch myself some days because I get to do what I really want to do with my life. The passion only grows and grows with each role, because I learn something new every time, gain something from each job. Being on set and in another character makes me feel limitless. 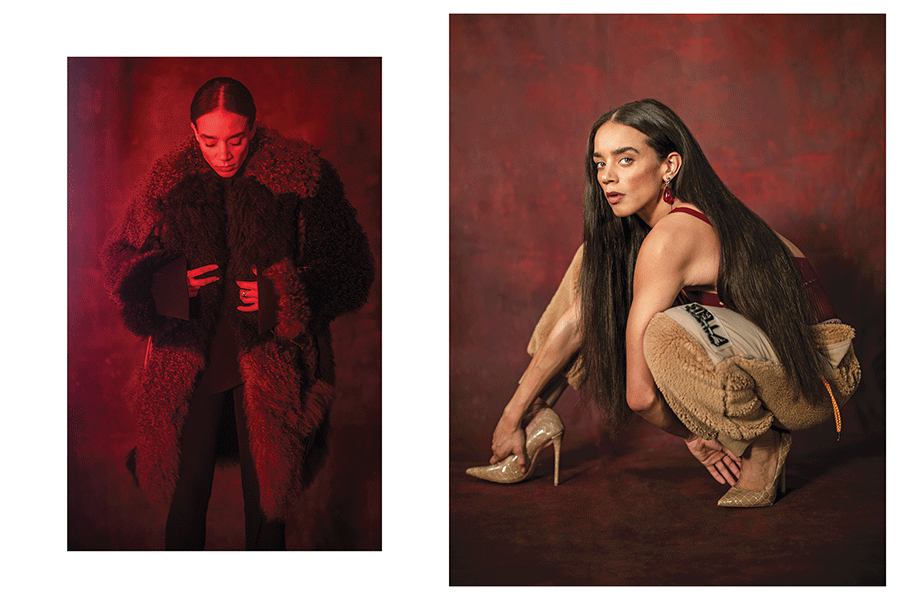 How did your break in Whitechapel come about? Whitechapel was my first ever TV break, I was still at drama school, and I was doing my last show. I had already signed with my agent, Scott Marshall, and they really got the ball rolling with auditions. I remember, when I got the job, I arrived on set, and I was like a rabbit in headlights. There was so much that I didn’t know, including that I didn’t have to eat the set food in the dress rehearsal, which I obviously did! It was definitely a learning curve for my TV – and later film – career.

What has been your best, or worst experience at audition? I think my best experience in an audition was when I met THE Steven Spielberg for Ready Player One. I was so nervous beforehand: I went to the bathroom to call my dad. He told me to look in the mirror, say my name out loud and breathe in deeply – so I did, and suddenly I was ready. It turned out to be just a wonderful, fun meeting – Steven wanted to get to know me and asked lots of questions about my life. We talked in-depth about the role, and it all went by so quickly – then he told me to stand up and said there and then: “You’ve got the job”. I was screaming inside; I couldn’t believe it. So yes, that was definitely the best, best, best experience and audition of my life. I will never forget it.

What has been your favourite project to date? I can’t really say, because I have had the honour of playing so many different and wonderful characters. I instantly think of Ready Player One, Ant-Man and the Wasp… Of playing Wilhelmina ‘Helm’ Watson in Brave New World, Jill Valentine in Resident Evil and Maya in Unwelcome… There’s just so many that it is impossible to choose between them. What I can say is that I have no regrets.

What would be your dream role? Each character has given, and offered me so much – and they are all so different. This is what I love about my career: every day, every project and every character is so different. That’s why even the idea of that dream role doesn’t exist to me, because every role is surprising, shocking, new and empowering. There is also the unknown – where a role you might not have thought could have impacted you, might have changed your life and become really special. Also, it’s not just about the role, it’s the family you join. The director, the production team and your co-stars all make your experience unique. They complete it. 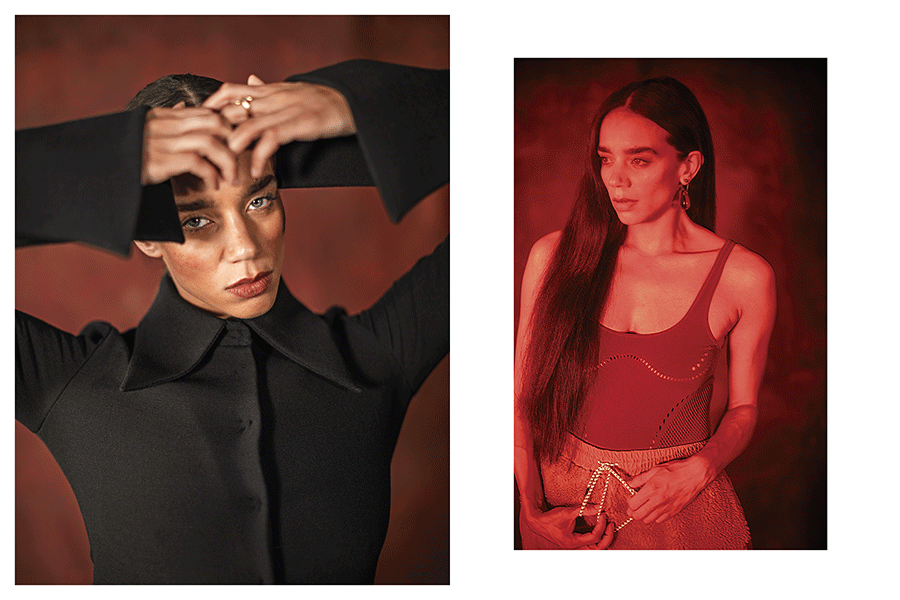 You were named a Screen International Star of Tomorrow in 2016 – how did that feel and how do you think it has impacted your career since? It was an absolute honour. I felt so humbled and valued as an actor, and also recognised for my work. It was an emotional moment. I can say from the bottom of my heart that that moment is something that will stick with me forever. I think it elevated my self-worth, it played a huge part in building my confidence and helping me grow in this industry… I felt like I could conquer anything after that.

Who inspires you? My mum was my biggest inspiration. She was a warrior, a fighter; beautiful, intelligent, honest, unapologetically funny, stylish, unique and strong. She had a symbolic class about her, and she was my hero. If I can be even half the woman she was, then I’m a happy camper. She gave me the best advice, which was that no matter what life throws me, no matter how high or how low it gets, to always stay grounded and never lose sight of who I am.

What do you consider to be your biggest achievement and why? My biggest achievement? I guess self-achievement is a process, but I am proud of the roles I have played. And I am proud of my survival at times when things were tough. But I do have to say – buying my house in London is something that makes my soul smile, and that’s because it is mine and mine alone. I worked hard for my bricks and mortar, and I feel all grown up when I think about how I have achieved it through that hard work.

Can you tell us a little bit about what you love about living in London? People always ask me if I am going to make the move to LA and I always say no, because no matter where I film in the world, I can’t wait to go home to London. I love the pace, I love the culture, I love the hustle and bustle and the raw edges. I love how you can really be yourself in London – there is a freedom it brings me, for sure.

What are you looking forward to in 2022? I am looking forward to the projects I have lined up next year, but after the pandemic and experiencing a traumatic loss last year, life has taught me that we really can’t predict or expect anything. So don’t waste time looking too far into the future, because you’ll be missing the present.

Resident Evil: Welcome to Raccoon City will be released in cinemas on 3 December