As the latest adaptation of Jane Austen’s Emma hits cinema screens, Amber Anderson talks about her role in the film and explains how her time as a model and her training as a musician helped to shape her career.

The role of Jane Fairfax in Working Title’s adaptation of Jane Austen’s Emma, directed by Autumn de Wilde, was irresistible for Amber Anderson. “It was an amazing opportunity for me to act and to play the piano, and to bring those things together, and in such an incredible production,” she smiles.

Performance has always been in Amber’s blood, but it was originally music that called her. “I was planning to be a pianist. That was everyone’s plan for me at least. I was at music school up in Scotland, where I grew up, and I got to about 16, and loved the piano so much, but could feel myself resenting all the practising I had to do,” she confesses. “And so I just began to consider other things. And I had always thought about acting. And completely separately to all of that, I had been scouted as a model, which was very surprising, but also incredible, because it was a real opportunity to get out of Scotland and come to London,” she tells me.

Recalling coming to the Capital, Amber says: “I met some acting agents, and got myself an acting agent. And I just started auditioning, while I was doing modelling on the side. And yeah, I had been doing both of them simultaneously for quite a long time, but the last couple of years it has become really just acting.”

Along with financial independence, Amber believes that the modelling prepared her for the audition process as an actor. “I personally find the rejection in modelling is way more brutal, because it just comes down to very surface level stuff. You just won’t get a job because your face is wrong,” she laughs. “If you find a way to thrive and not just survive in the industry, I think it can teach you quite a lot of resilience, which I definitely carried across to being an actor.” 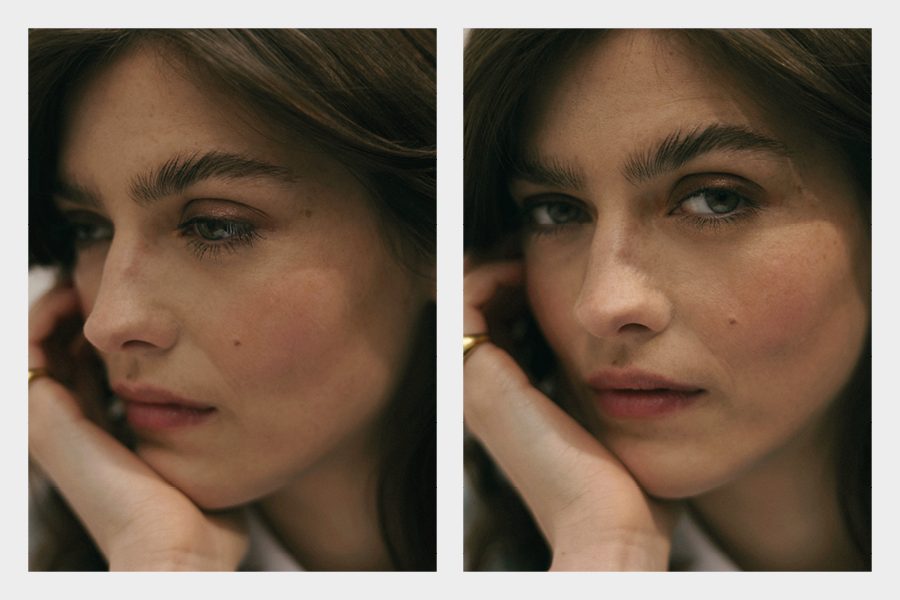 (Amber wears: Shirt by Lemaire, knitted vest by ALEXACHUNG, ring by Alighieri and earrings by Completedworks)

So would Amber say the two careers work hand in hand? Not really, she says – at least not for her. She explains that there were some things she had to work hard at letting go of when moving between acting and modelling jobs. “I think in order to be a good model you have to be incredibly self-aware,” she says, carefully. “To really be able to just step outside of yourself and know what your face looks like at different angles, and what your body is doing, and I think you can begin to get quite caught up in how you look, but when you are acting you just shouldn’t be thinking about that at all.”

Of course, in acting, the self-awareness comes when having to watch the finished production. “I do know some actors who have never seen anything that they have done – because it is just weird, to be honest,” Amber admits. “It’s kind of like when you hear yourself on an answerphone message, but times 100, because it is how you blink, and how you speak… I struggle to be objective and then I feel quite insecure. I usually watch myself, then have a small breakdown, then let it sit emotionally for a couple of days. Then about two days later I start to feel good about it,” she laughs.

She is now, she says, feeling very positive about Emma. The film was her first experience of period drama, and very different to previous jobs. “The production team wanted everything to be done authentically,” she tells me. “So from the way that they did our hair to the undergarments that we wore under our costumes, everything was made to measure and really authentic to the period. And most excitingly for me, the instrument that I was playing in the film was a fortepiano, which is a very early version of the modern day piano, and something that you usually only find in museums.” 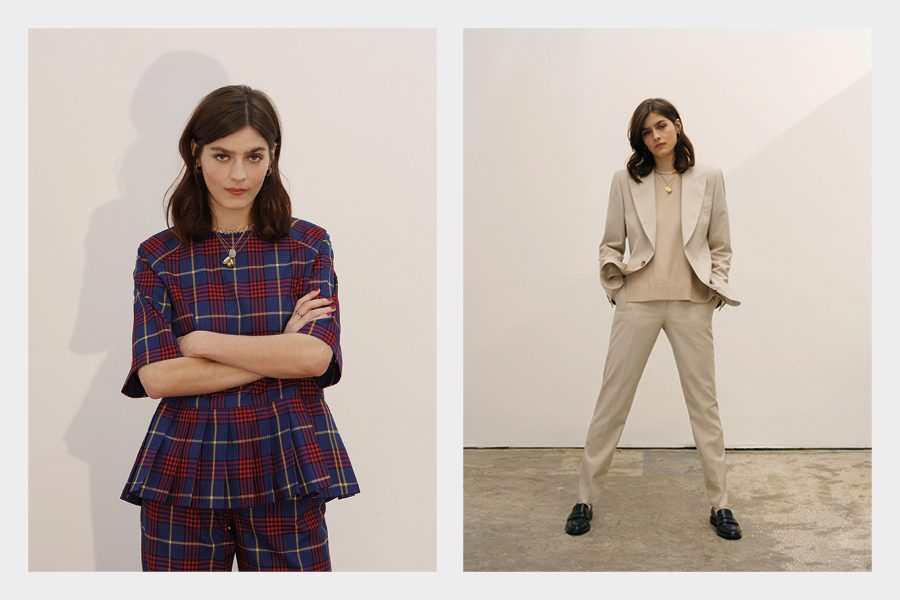 (Amber wears left: top and trousers by Mulberry, necklaces by Alighieri and Hermina Athens, and earrings by Completedworks and Maria Tash. Right: Suit and knit top by Tod’s and shoes by ATP Atelier)

As thrilling as she found being up close to the fortepiano, it brought with it its own challenges – Amber had to learn to play it almost as though it were a whole new instrument. “I think there was a thing where they were like, ‘oh, well she’s a pianist, and so she’ll be able to pick it up’, when actually it wasn’t as simple as that, because it is so incredibly different to what I am used to. So I hired a piano teacher, and she came on set with me – that was a really incredible opportunity.”

Filmed in stately homes across the country, the schedule was quite intense, but Amber says that it was made bearable by being able to slip home to see friends during weekends off, and being with the very best people while on set. “The cast is just pretty extraordinary,” she tells me, “and there were about ten of us who were in quite a lot of the time, so we really became a kind of gang. We ate dinner together most nights with Autumn, and it was a really lovely atmosphere. Everyone was very supportive – I still see a lot of them now, even post filming.”

Amber will be back on the big screen later this year in White Lie, for which she won the Vancouver Film Critics Circle’s award for Best Supporting Actress in a Canadian Film. “It’s a drama by two directors called Yonah Lewis and Calvin Thomas,” she reveals, “and it is about a girl who fakes cancer in order to defraud people. And I play the second lead – her girlfriend, who does not know at all that she is lying. I am also really proud of that film, it is quite dark. We took it to the Toronto Film Festival last year and people left the screening feeling quite shaken.” 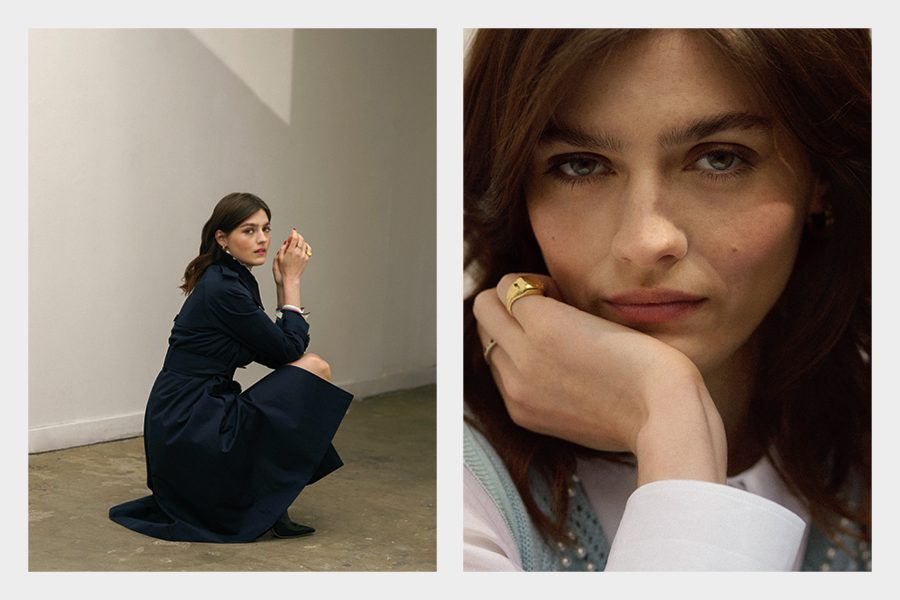 It may only be March, but it is shaping up to be a good year – is Amber happy with the way things are going? “You can never get complacent,” she says. “I think I am sort of obsessed with my job because I feel that you really do get better every time that you do it, and you learn something every time that you do it. And I just think it is incredible to have that in terms of your job – there is no such thing as perfection, you are driven by a mixture of fear and a desire to develop,” she grins.

How would she like to see that development taking shape? “I would love to do theatre,” she says. “I haven’t really had the chance to do that yet and it is something that I am really putting everything out there to try and do soon. I just know that I would love the experience of doing theatre… I have performed on stage quite a lot as a musician, and I really love the feeling. There is nothing quite like it really. I think because of its very nature, because it is live, and inevitably it changes every time you do it, I think there is something really magical about that. And actually maybe quite freeing, you know?” she grins. “In some ways I think that it is more of an actor’s medium, whereas I think in film there are so many other components and people contributing to the final form, so as an actor you are actually quite out of control in a sense. Which can be tricky.”

Something Amber is very much in control of, though, is her music. “I still take piano lessons,” she tells me. “And I am currently studying to take my diploma, which is quite exciting, and quite terrifying as well,” she reveals. “It will be the first exam I will have sat since I was at school. And it is quite an intimidating exam. I think it’s nice to have something separately to work towards that is like a project I suppose. It’s just yours really.” For now, we’ll have to make do with her fortepiano recitals in Emma.

Emma is in cinemas now