This architect couple have brought a touch of the Left Bank to a light-filled laterally converted penthouse in Ladbroke Square.

What made you fall in love with the penthouse?
Claire and I love top floor flats because of the views and the feeling that you are above the city. There is a sense of privacy and light tends to be better. This flat overlooks a private square with huge trees, so we recognised its potential. We were excited at the opportunity to create lateral living; anyone who has experienced this finds it hard to go back to living with stairs! Although the existing interior was a mess, we felt with work it could feel very lateral, which is rare in London. 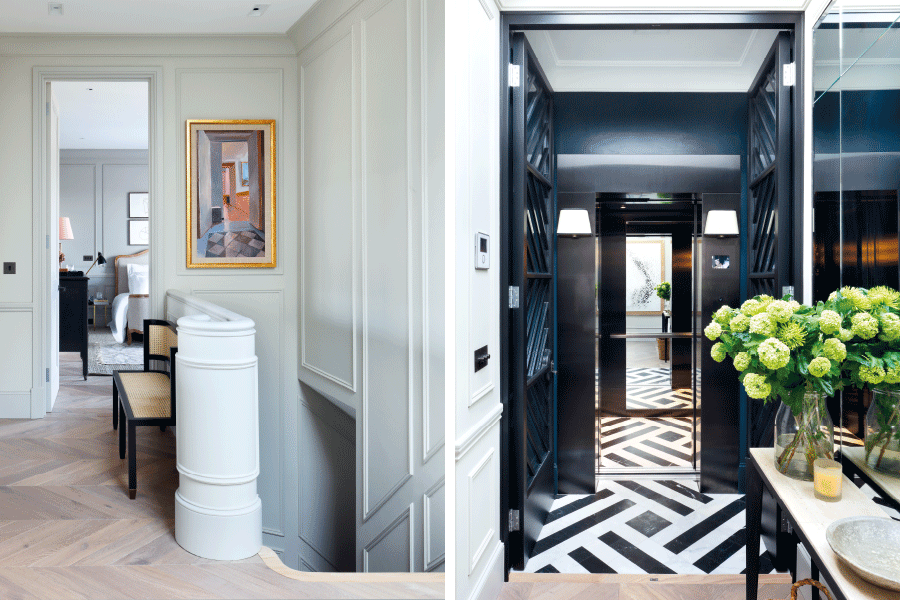 What state was it in when you bought it?
It had been occupied by an older gentleman for over 40 years and was arranged as a four-bedroom flat with corridors. The floor-to-ceiling height was on the low side and it had a column in the middle of the sitting room; the lift shaft terminated on the half-landing below with a flight of stairs up to the front door. We knew what we had to do, but there were some pretty big steps to take in order to get there.

What were the main challenges you faced during the renovation? Was there anything you wished you’d known before?
Our works were ambitious for what, on the surface, seemed to be an interior fit-out. We essentially removed and rebuilt the roof. We extended the concrete lift shaft to the top floor and designed a new lift car. The new lift opening on the top floor had to be at 90 degrees to the openings on the floors below so it required a new, cantilevered lift mechanism. We also had to negotiate the purchase of some of the common parts so the lift door could open directly into the flat on the top floor. We split the building works into shell works and fit-out works and appointed two contractors for each part. Halfway through, the shell contractor went into administration, so we brought the fit-out contractor into the project much earlier than we were hoping for. We lost about six weeks as a result. The hardest thing was probably not disturbing the other residents in the block with our works. We agreed restricted hours for noisy works, but it meant the works took longer. 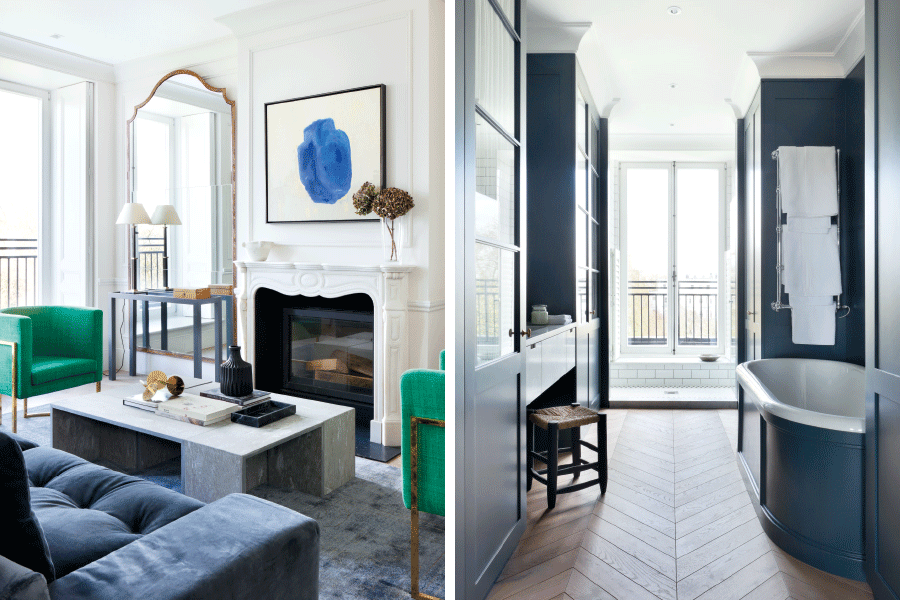 How did you reconfigure the apartment to make the most of the fabulous views?
The flat has windows on both sides so there were lots of opportunities to use the views. We re-thought the layout to work more optimally with the windows. In the new layout there are fewer rooms, but they are more generous and each room has more windows.

You’ve described the aesthetic as “Parisian art de vivre” – can you elaborate? How easy was it to channel this in a London interior?
This is not a typical London interior at all: it is unique as it is a lateral space, it has views over rooftops, and it has an elevation full of full-height French windows. While we were designing it, we quite instinctively started looking at images of Parisian apartments for inspiration. We referred to their proportions and room dimensions to get the layout right. The challenge remained to make it feel appropriate for London, so we referenced certain Victorian details in the panelling, the skirtings, architraves and doors. Victorian detailing is austere relative to the more flamboyant Parisian interiors. 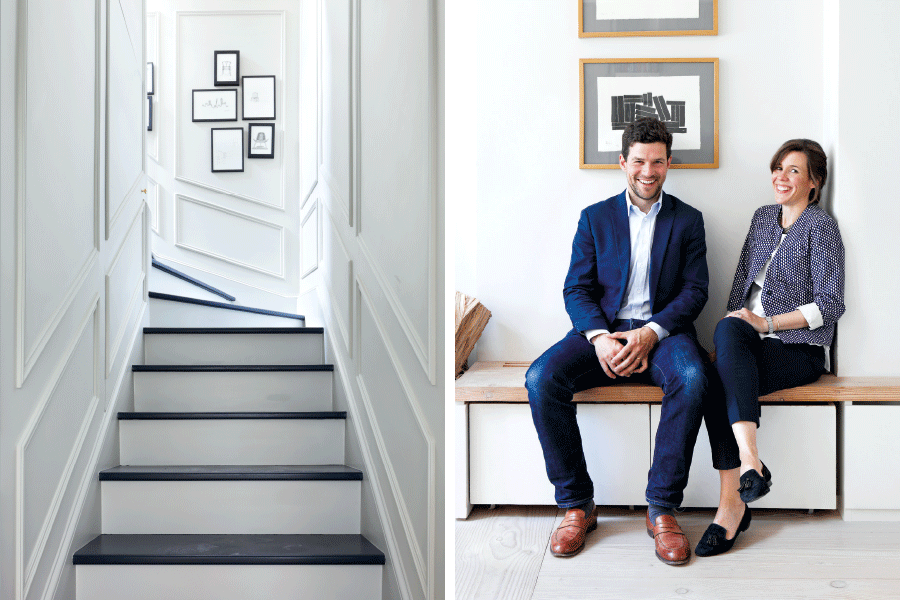 What qualities did you look for when you were choosing materials and fittings in the apartment?
Light, proportions and symmetry are elements we really enjoy and look to introduce into our interiors. We wanted to accentuate a sense of height through the proportions of things; you can see this on the tall pair of mirrors either side of the fireplace and on the proportions of the wall panelling. Pairs of objects, such as the green club chairs and lights, help reinforce the sense of symmetry. Having said that, in the living room, we wanted to counter the feeling of formality that often comes from symmetry, so we created a second seating area that feels more natural. As the background architecture was very pale, it was important to introduce strong colours in the fabrics and artwork, and flashes of texture in objects or pieces of furniture. We love natural materials because they look so timeless, and expressed these in the furniture designed by De Rosee Sa.

What’s your favourite part of the apartment and why?
I love the proportions of the sitting room with its two seating areas, fireplace and three large windows. And I get a thrill when walking across the black and white marble floor that we designed for the entrance lobby and lift car. It lifts my spirits every time. 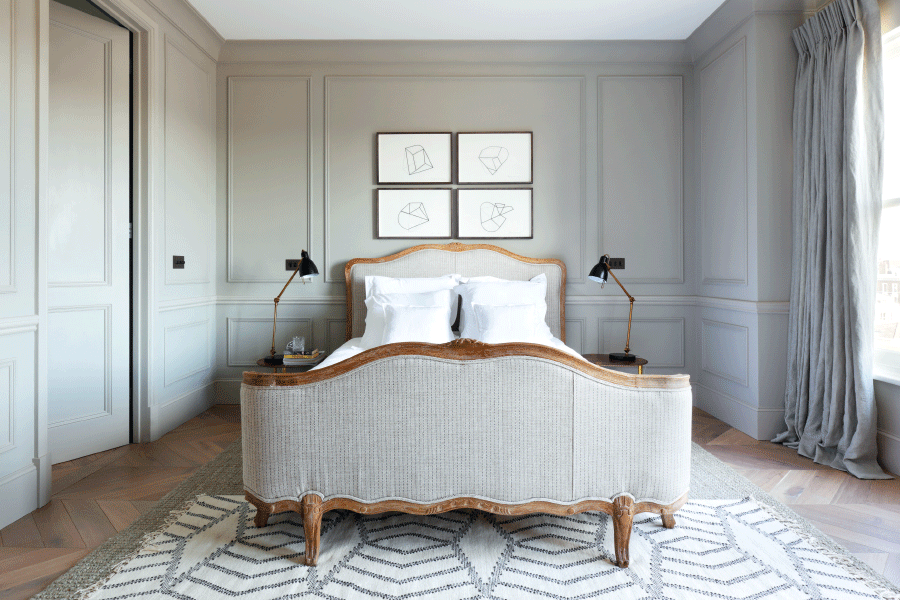