With a clientele that includes Naomi Campbell, this fireplace and antiques specialist is in high demand. Suitably, his own apartment is A-list glamorous.

As the founder of Renaissance London, a dealer of fireplaces and other eclectic salvaged artefacts, it’s entirely fitting that Owen’s property is, in itself, a repurposed one. The east London building was once a thriving public house before being converted into offices. Now it combines a luxurious apartment with commodious showroom space below for Renaissance. The company specialises in antique fireplaces, but beyond that, the shop is a veritable treasure trove of pre-loved furniture, sculpture and vintage homewares. “It hasn’t been a pub since the 1970s,” Owen tells me. “I got very lucky! We basically converted it into a massive apartment upstairs – we have three double bedrooms with en suites. And we have a large basement as well as an old printworks next door, so there’s a huge warehouse.” 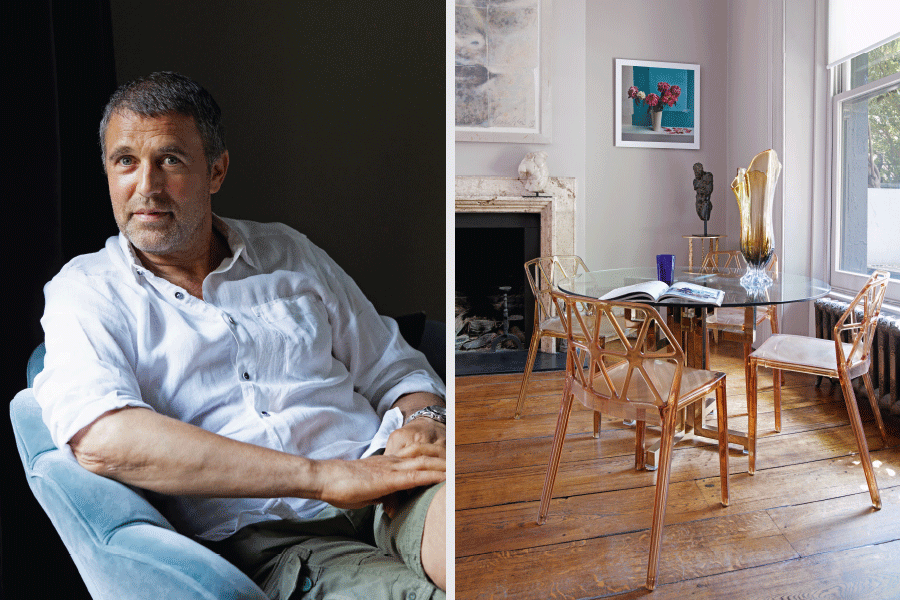 Naturally, the flat, which Owen shares with his girlfriend, is filled with art and antiques. Even the sleek contemporary kitchen is not without a huge brass horse sculpture ornamenting the worktop. I wonder if, given that he has a wealth of incredible antique finds at his fingertips, Owen isn’t ever tempted to over-furnish. How does he know when it’s the right time to step back and award the pieces the light and space they deserve? “I just play around with things,” he explains, simply. “I mean, luckily I’ve got the shop so I can try something out and obviously, if I don’t like it, I can change it.” 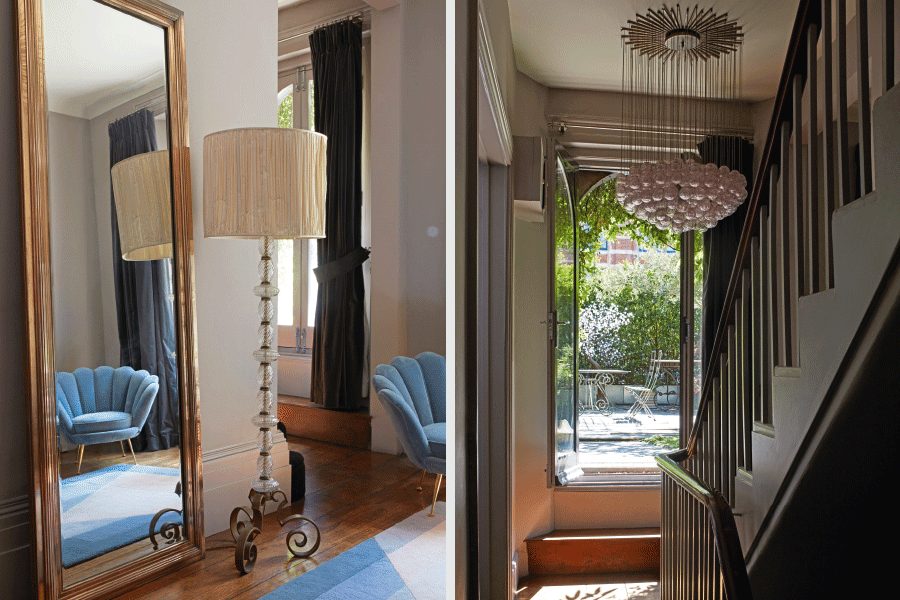 I suggest that Owen must be a natural when it comes to interior design and putting a room together. “I think with interiors it’s just common sense really,” he laughs. “But my granny always used to say to me that common sense isn’t that common… I suppose it does come naturally, just because I’ve been doing it for so long. I mean, I’ll often go onto a site and I’ll say to someone, ‘do that, that and that, and it’ll work,’ and they’ll be like, ‘oh I didn’t think of that!’ – so yeah, I suppose it does. Maybe I should charge for it!” 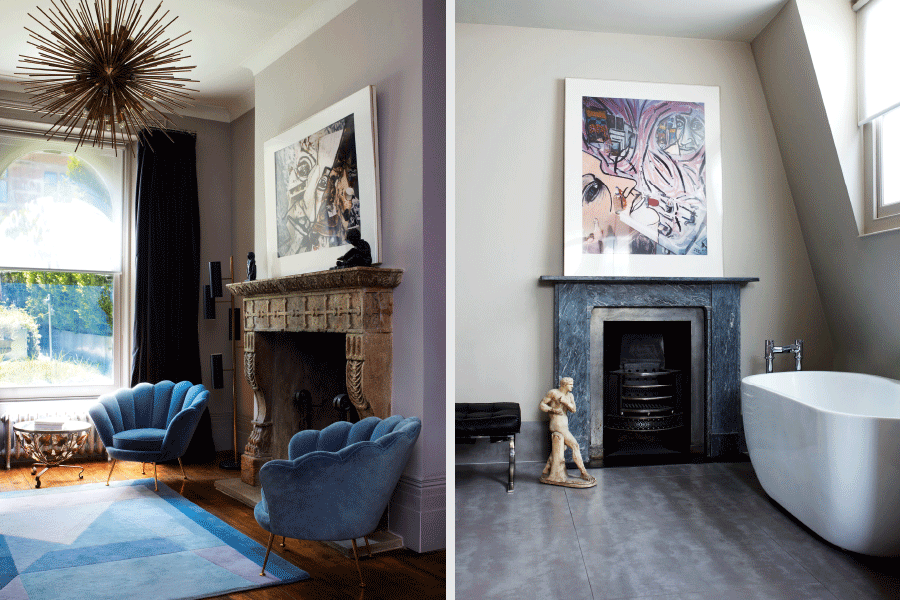 Get Owen onto the subject of sustainability and he lights up quicker than one of his reclaimed fireplaces: “I have a huge bee in my bonnet with stoves at the moment,” he tells me, “because stoves have become very popular in the last ten years and they’re the most unsustainable product on the market. They all burn logs. I just don’t get it!” For him, the antiques industry was always about sustainability, long before sustainability became a buzzword. “We’ve been in the business of recycling for 30 years. It’s always been about restoration and bringing something back to life again,” he says. Early adopters, indeed. He explains to me some of the processes behind installing a reclaimed fireplace and recalls one particular job that was quite an undertaking: “We fitted a fireplace in Marylebone, in a mews house, and it took us a week where the average fireplace takes half a day. But you could walk inside this one. It was a massive Italian fireplace out of a castle. This lady had knocked two mews houses together and taken a floor out, so she’s got this incredible double-height mews.” 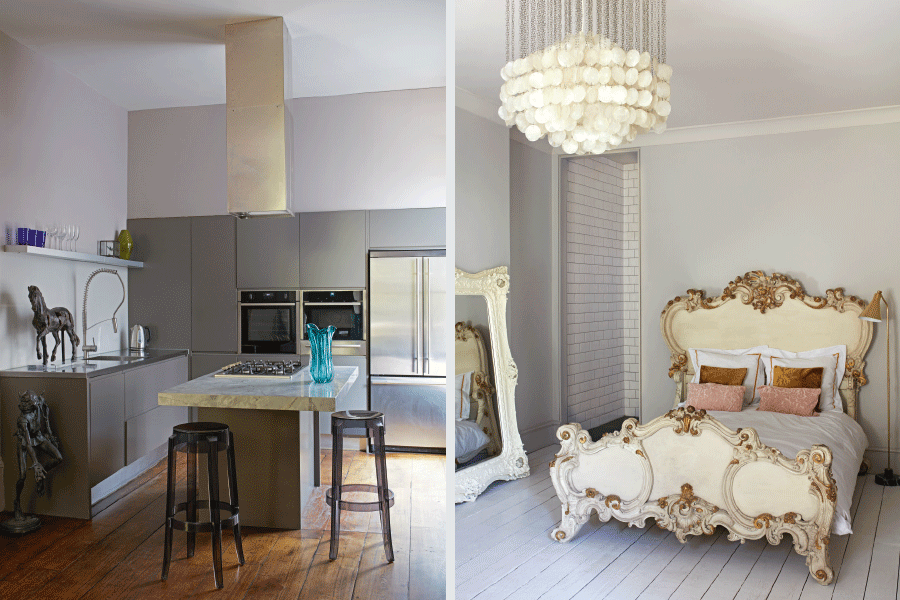 I wonder how and where his career restoring fireplaces started, and sure enough, Owen has a beguiling backstory. He tells me that he was “at a bit of a loss, really” and that he had “lost everything in the crash when Thatcher was around.” It transpires that, as a younger man, Owen was in fact homeless, before he got a job stripping pine furniture. “I was earning 20 quid a day and I was happy with that, living in a squat in King’s Cross and staying out of trouble,” he explains. “But I couldn’t believe that you could just put something in a caustic tank and for it to come out without the paint on. We started doing a few fireplaces in the tank and it went on from there, really. This was about 27 years ago,” he says. “I mean, trust me, I’ve earned my stripes.” 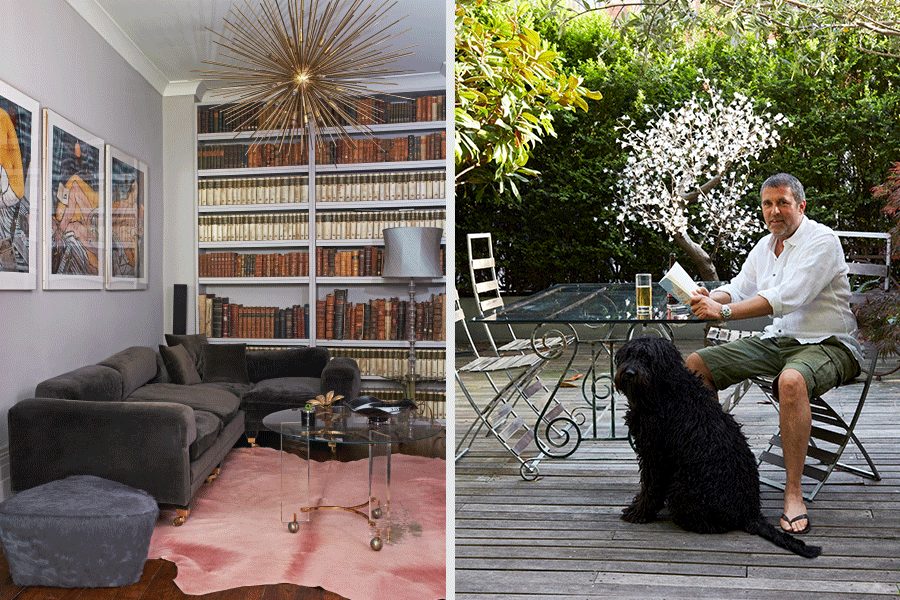 Anyone with a passion for the pre-loved is enthralled by the stories behind the pieces and, to form, Owen has quite a few. That his showroom flooring is reclaimed from the Sadler’s Wells stage is just one of them. I’m more than intrigued. “That was in the days when you could literally walk onto a building site and ask them if there’s any salvage,” he says. “Sadler’s Wells is just up the road and I remember, we’d just got hold of the shop and were gutting it and I went past and I just asked. The builder pointed to the floor and said, ‘yep, all that’s coming up,’ and I said ‘how much?’ I think we gave him a tenner a bag. I had about 40 bags off him. You couldn’t do that now. It’s illegal!” He goes on to tell me about his amazing gilded Louis XVI bed: “It’s quite a bed, isn’t it! We bought it off friends of ours, La Maison London.” And the vintage Gucci dressing room mirrors: “They were from a guy who’d had them in storage for about 30 years. He was a sort of high-end shop fitter and he had the job of refurbishing Gucci in the early ’90s.”

For Owen, the apartment’s luxurious living room, with its imposing stone fireplace, its blue velvet cocktail chairs, and its enormous golden starburst chandelier, is his favourite place to relax. “I just like staring at those books,” he reveals. “I often stare at those and wonder about all the knowledge in them. But I’ve hardly read any of them. They came out of a convent in Hertfordshire.”