This interior stylist, designer and maker shows us around her London pad that’s bursting with colour and character.

There was a time when Nicki considered a move to the country to accommodate her growing brood. She tells me she was “very close to putting in an offer on a beautiful large home with a pool and an orchard.” But like many city dwellers who’ve entertained the idea of a country pile, the pull of London living ultimately proved too strong. “I suddenly realised we were chasing a dream that wasn’t really ‘us’,” she admits. “I didn’t want to be responsible for large grounds and I love living in London, enjoying the local restaurants, museums and culture.” The designer shares her Victorian semi with husband Matt, sons Oscar and Bertie and daughter Bo, alongside Wolfie the “ridiculously fluffy” family cat. 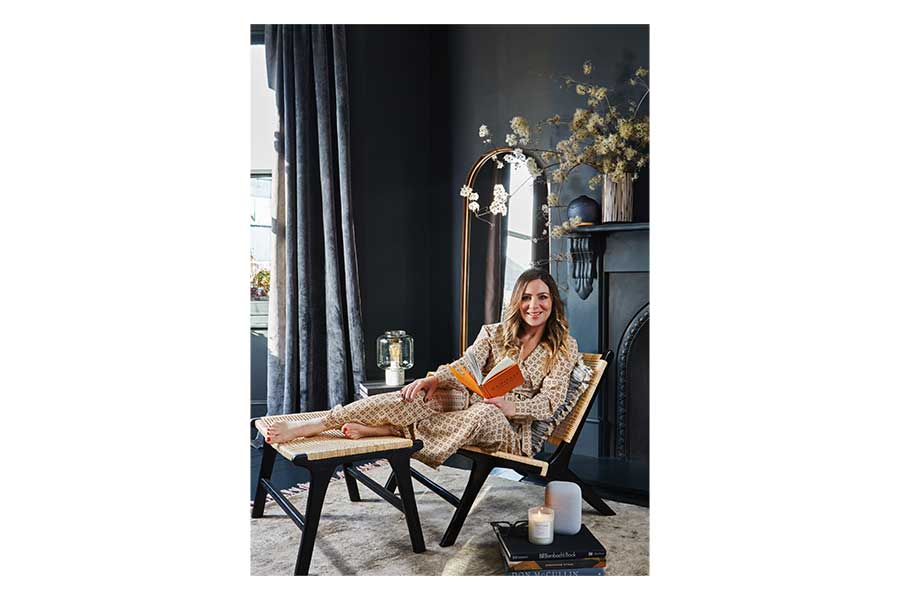 It was always Nicki’s intention to find a project of a property, one which she could strip back and put her own creative stamp on. But there are cosmetic doer-uppers, and then there are homes which require a major overhaul. “To be completely honest, I hankered after a wreck,” she says. “This house was lived in by an older single man and the décor wasn’t to my taste at all. But we loved the classic exterior with pillars either side of the front door, and the sash windows. We were also lucky that the house had lots of internal original features such as intricate cornicing and ceiling roses, and large double doors between the reception rooms. When we moved in, we completely gutted the house apart from the kitchen, we incorporated a boxroom bedroom to create a large family bathroom and study. We redecorated throughout, sanded floors and put back fireplaces where they had been removed.” Indeed, character is all-important to Nicki, and here, the designer resolved to restore as much as re-paint: “I’ve always preferred an older house with character over a new build,” she tells me. “I love high ceilings, cornicing details, ornate fireplaces and big bay windows. Old houses have enormous potential to extend, plus I love thinking about all of the people who lived here before us and the stories these walls could tell.” 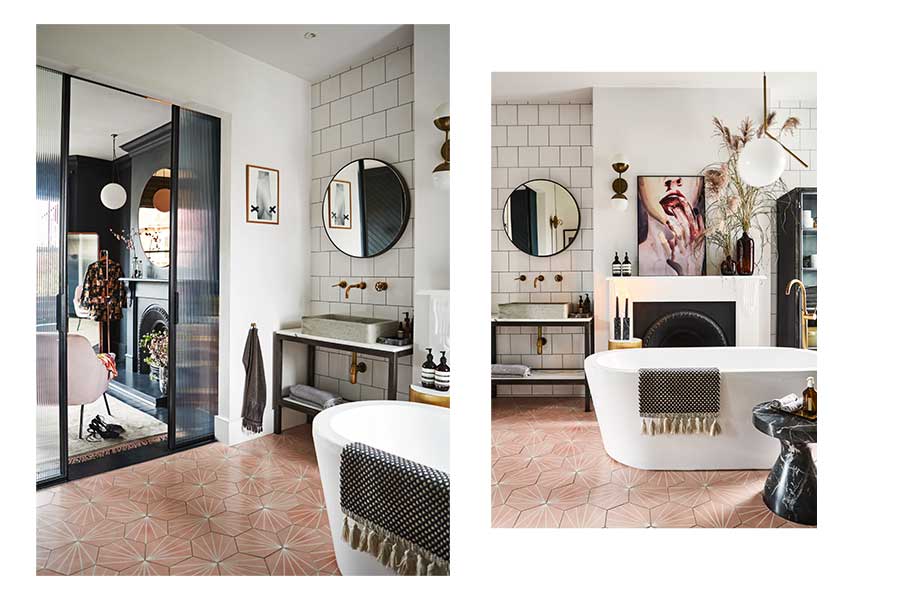 But what was once a modest three-bed, one bath abode soon became a grand family home complete with five bedrooms, four bathrooms, a dressing room and even a garden studio, which came to be following a serendipitous moment: when a plot of land at the back on the property became available, the couple decided to spend what would have gone on stamp duty for the country house on extending their London footprint instead. “The extra land gave us a much bigger garden, which was not only perfect for the children to play in and for us to entertain in, but also allowed me to build the studio,” Nicki explains. It is from here that she now runs her interior design business, ‘& then they went wild’. 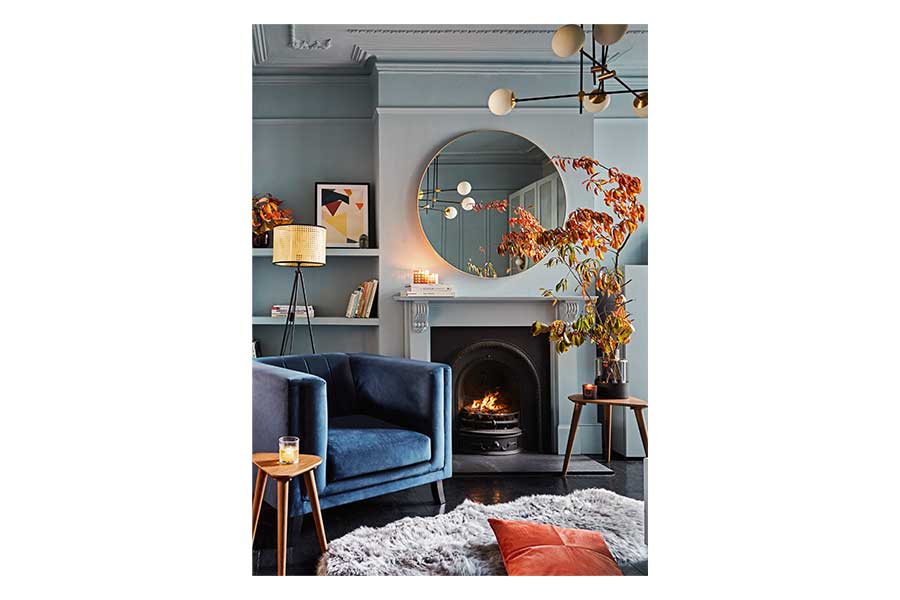 The house is playful in design, and where period features have been meticulously restored, they are also respectfully given a 21st century twist, such as in the calming living room, which is painted a chic monochrome blue: the walls, ceiling and even fireplace are perfectly colour matched. And there’s dark drama in the main bedroom: jet black walls are offset with plush rose velvets and rich gold accents in the soft furnishings, lighting and accessories. I wonder how Nicki would describe her style. “In my own home I’m bold, contemporary, and creative,” she explains. “I love to design special pieces of furniture and storage solutions, and I’m happy to do things that people might think brave, such as painting our bedroom black. My background in graphic design means I love strong graphic shapes such as lines, grids, squares, circles, and diagonals. But I often mix them with more traditional elements such as panelling and soft textures in rugs and upholstery.” 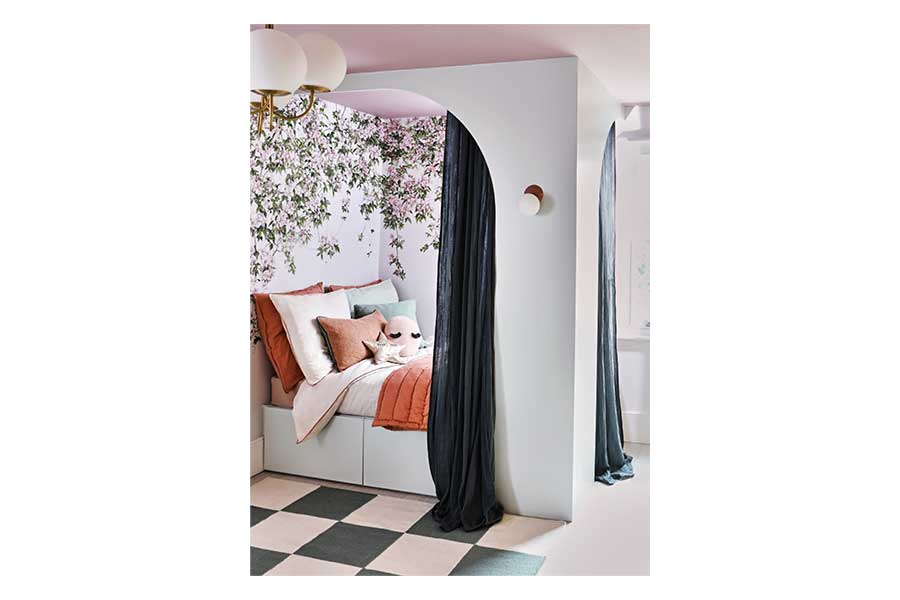 When it comes to furniture choices, Nicki skilfully mixes old and new with the affordable and the aspirational. Independent designers feature alongside high street names and high-end brands, keeping the look fresh and modern with a few surprising elements thrown in, too: oversized mirrors are met with large, bold lighting fixtures, while each of the kids has a bespoke bed that Nicki designed and commissioned herself. “It always feels special to design and build something unique for your children, something that they will always remember,” she says. “They’re functional with plenty of storage, incorporating desks and reading zones – but also fun with curtains, hideouts, and places to climb.” 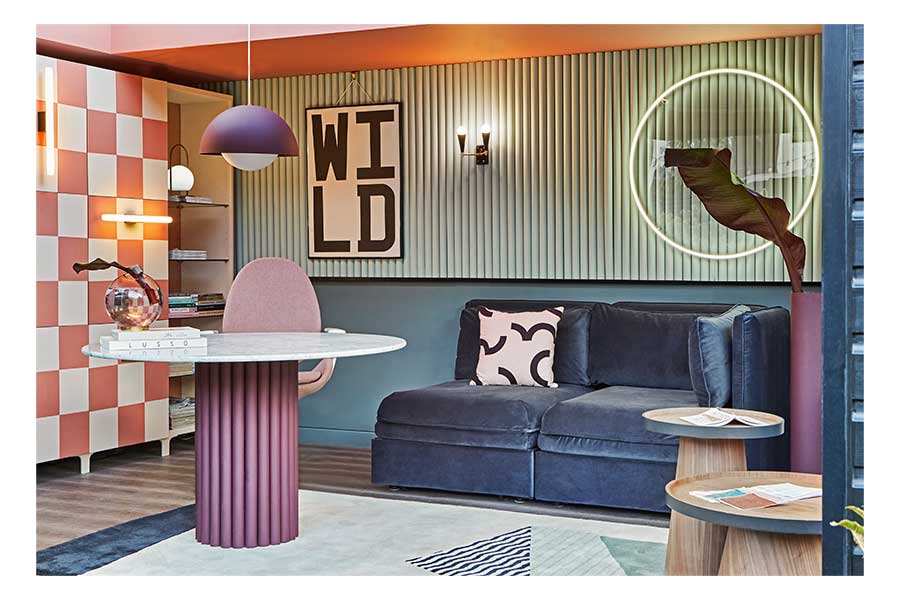 In Nicki’s home, the playful décor isn’t only for kids, however. Her studio space is bursting with creativity – not to mention colour – with its pink and white checkerboard cabinetry and its contemporary marble topped table, complete with eye-popping purple plinth. And where luxury meets comfort, one of Nicki’s very favourite pieces is a tub chair coveted from Abigail Ahern, which the designer’s friends clubbed together to buy for her 40th. “It’s a modern classic and I absolutely adore it,” she enthuses. Another favourite is a mid-century inspired rattan chair and footstool set from Home Essentials, which Nicki recently used to create a reading nook in the bedroom. “I listen to chilled music in this space. It’s a place where I get my best creative ideas,” she reveals. Nicki is, in fact, brand ambassador for Home Essentials, and can often be found giving inspiring interiors tips and tricks to customers on the brand’s social channels. She’s also got a number of residential and commercial projects up her sleeve, including “a very cool independent shop.” But when she gets home, the work doesn’t stop: “I’m about to extend our kitchen into the garden and the side return to create a huge kitchen, utility and family space,” she tells me. “I’m really excited about this because we only have neighbours on one side so we’ve been able to make the walls higher than you might expect, which means the space will be flooded with natural light. We hope to start work at the end of summer, and I know it’s going to look amazing.”