This interior architect’s raison d’être is curated interiors that tell a story. His own west London apartment is a chic illustration.

“I call it ‘maximalist expressions in minimalist details’,” says Enis assuredly, when asked to describe his interiors style. For him, a clear creative vision is what’s needed to pull off a property like this one, with its chic monochrome décor and dark drama. “It’s a narrative based on experiments with contrasts,” he explains, “creating a harmonious balance between fantasy and reality, reconnecting the past and present, using Eastern and Western elements to design spaces with a heritage feel… I think I am a curator as well as an architect, and my strength is to bring things together.” 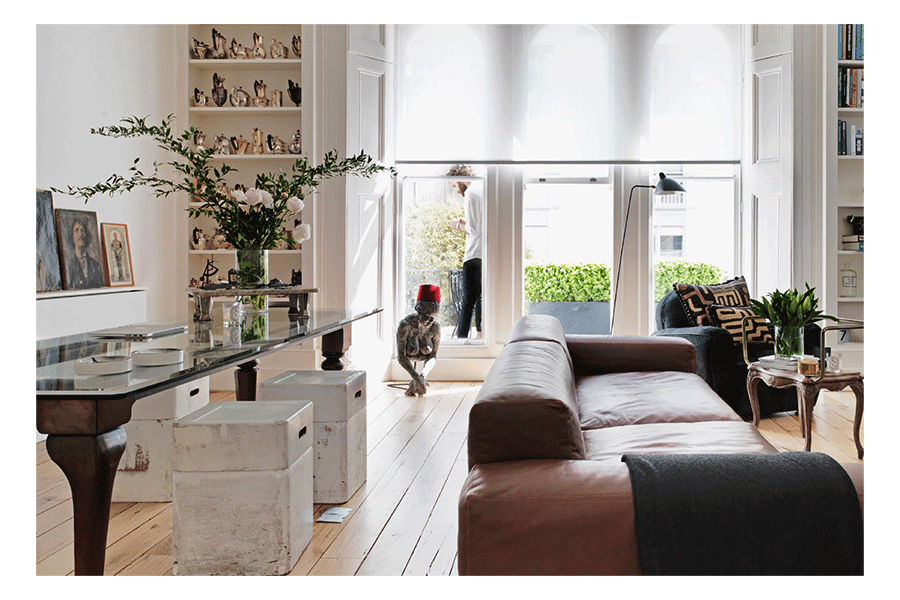 Having studied and worked in London, Enis returned to his home town of Istanbul in 2015. Here, he co-founded Sanayi313, a concept store, kitchen, and architecture studio with his brother Amir. But London will always be Enis’ adopted home, such is his affection for the city, and he’s glad to have set down roots here, too. “London is one of the most inspiring cities in the world,” he says. “A multicultural city that has everything – restaurants and shops from all around the world, galleries, workshops, museums and theatres… In London, you always find something to do. Istanbul is inspiring in its own special way. It’s a city where you feel the East-meets-West sentiment at its most intense. It used to be a much more vibrant city, booming with creativity, but let’s say that’s been put on hold for a while. Both cities have pros and cons, and I love them both. Istanbul has a better climate, that’s for sure!” 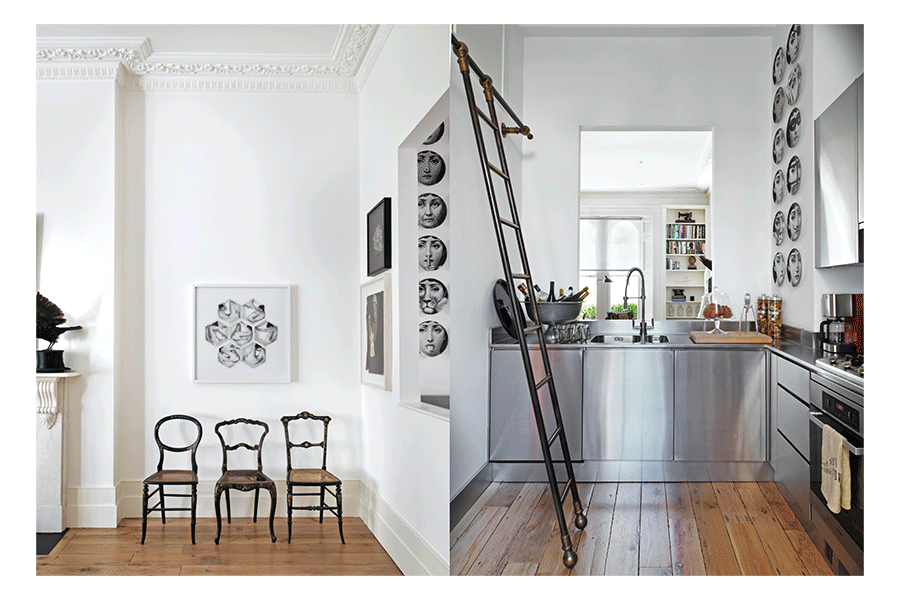 The Notting Hill apartment is a spacious two-bed, two-storey affair that sits on a narrow footprint but benefits from oodles of natural light, thanks to its grand floor-to-ceiling arched windows both front and back. Built in the early 1900s, the flat boasts double height ceilings, a beautiful terrace, and plenty of original Victorian features, which Enis loves. “Buildings tell stories,” he says. “Character is all that matters. When I bought this property, I tried to understand the culture of the house first and built everything around it, making sure that with everything I added, the house remained true to its character.” While the bones of the property remained largely untouched, Enis opened up the kitchen space into the living room, installed an all stainless-steel custom-built kitchen and, ingeniously, designed a mobile ladder to provide access to the extra storage space above the ceiling. He also replaced the staircase connecting the two floors with a cast iron spiral staircase, bought from an antiques dealer. Along with a taxidermy crow perched mid-squawk on a black top hat, and a statement umbrella stand fashioned from antlers, the lacy black staircase is entirely in fitting with the apartment’s theatrical noir aesthetic.

“The black and white scheme is kind of a signature for me,” he explains, “and I wanted it to come to life by mixing in natural materials with character so that they contrast with each other. It was a deliberate choice to use materials with strong textures but not-so-dominant colours.” Flitting between the two cities, Enis imagined his London pad to be a home from home, and he wanted the end result to have a lived-in feel. While much of the designer’s interiors choices are starkly elegant – gothic even – the apartment is never not homely. A huge and inviting Arflex leather couch by Umberto Asnago and an antique pony skin club chair from Nicole Farhi Home await him on his returns from Istanbul, as does his favourite painting above the fireplace. “It’s the most treasured item in this house,” he says. “It’s a portrait of my aunt, showing her at a ball in Brazil.” He’s also named some of his favourite pieces in the flat, like pets. The taxidermy crow goes under the moniker of Hitchcock, naturally, and the statue in the living room, which Enis tops with an original, signed Ottoman fez, is called Esteban. The scarlet hat is a rare colour pop. 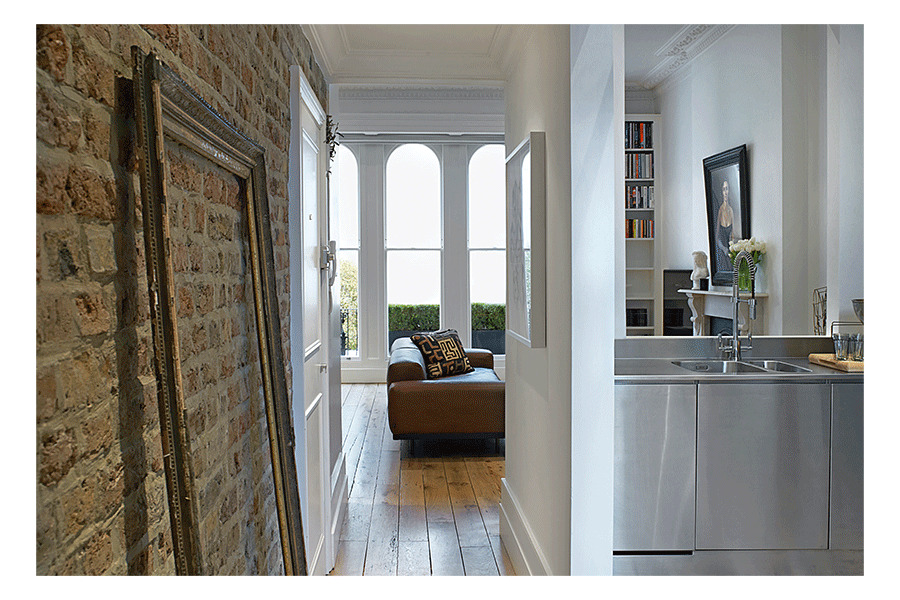 You don’t have to be a sharp-eyed magpie to spot the architect’s collection of shiny coffee pots. In fact, it’s given pride of place in the living room and takes up an entire built-in bookcase that reaches all the way up to the ornate cornicing. “I’ve collected them from antique shops around the world,” he says. “It started with one and turned into quite an impressive collection over the years. I love collecting things with a history, or story, and enjoy seeing extravagant collections in minimal settings.” True to Enis’ design philosophy, the pots are displayed in a creative fashion, meticulously lined up, handles pointed outwards. The collection becomes a sculptural artwork in its own right. “In terms of interiors, repetition sometimes generates very good results,” he offers. “When the repetition comes from such a collection, which is a personal thing, it adds so much character to the interior as a reflection of its owner. Then you know that it’s not solely about the décor, but the lifestyle.” 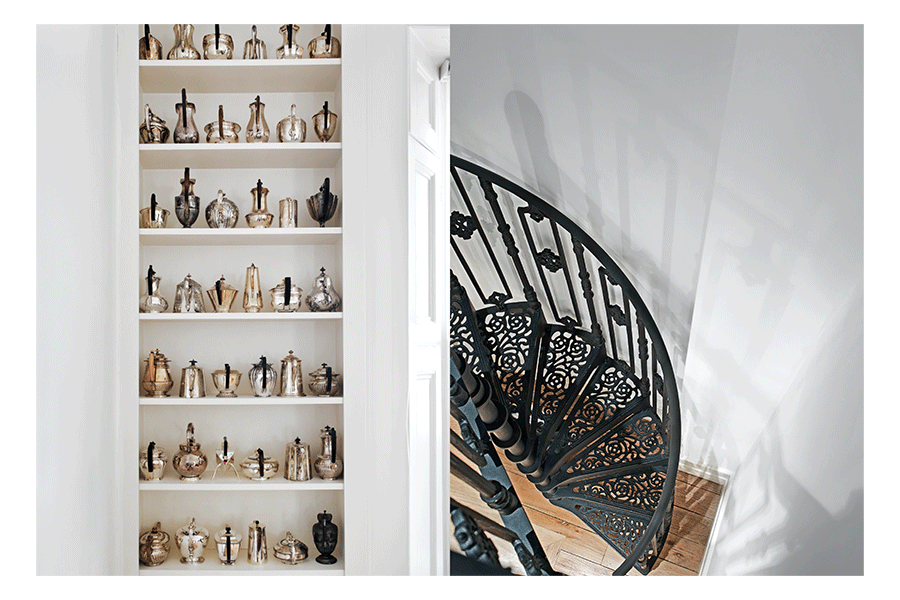 Enis deftly mixes chic contemporary pieces, such as his collection of Fornasetti wall plates in the kitchen (again displayed in a creative and considered fashion), with wonderfully raw and rustic finds – perhaps the most impressive being the apartment’s reclaimed wood flooring, which he obtained from an old tobacco factory. “But the overall result is not rustic,” he is keen to point out. “It’s a balance of old and new, rustic and modern – timeless really, just like the house’s own features.” In keeping much of the furniture simple and casual, and instead toying with the details, Enis is able to easily update the property whenever he chooses. While he has his favourite go-to brands, some of the furnishings, such as the dining table with the glass top, and the box stools around it, are his own designs. 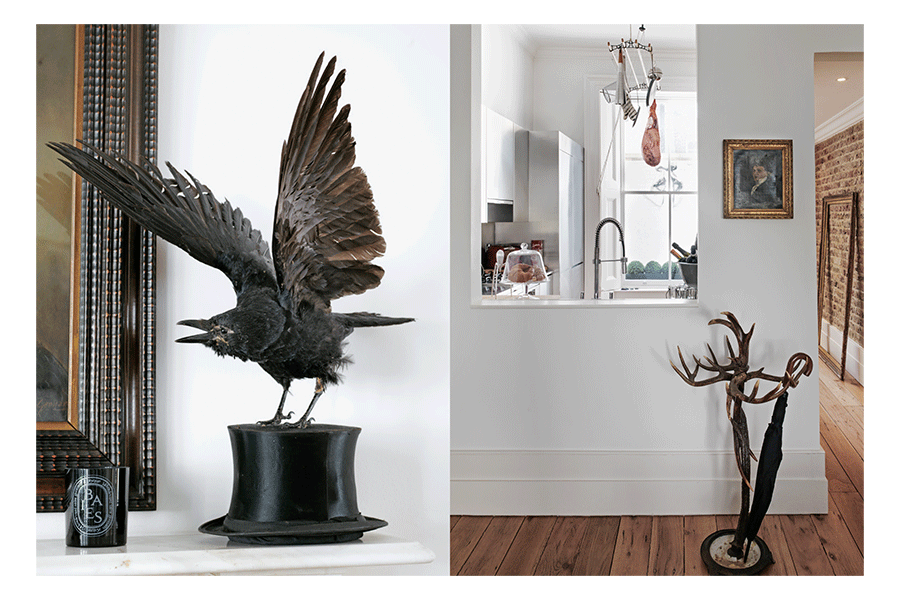 So what’s next on the cards for this interior architect with an international outlook? “There’s this sculpture park which is being built on Turkey’s Black Sea border,” says Enis. “The project consists of a glass building, an old stone building, and a completely preserved old stable… We are also working on a vineyard house project in Bozcaada, which consists of stone structures that are totally in tune with nature. And then there’s this beach house project in Miami, which is a work in progress. So we are quite busy!” It’s little wonder Enis will be putting his feet up in his beloved “weekend home” in Notting Hill whenever he gets the chance.