Fans of Chiltern Firehouse will be excited to hear that chef Lee Andrews is now cooking up a storm at NW1’s newest brasserie, Gabeto (Spanish for ‘our house’). Housed in Camden Market’s historic stable block, the exciting new venue features casual and formal eating areas, a cocktail bar, and a large heated terrace that will host a series of street food pop ups. The main brasserie menu promises to mix carefully sourced British ingredients with a hint of Latin flavour. We’ve fallen for the signature scotch egg. Nobody makes it better than Lee, but with his secret recipe we’re willing to give it a go. Perfect picnic fodder… Camden Market, via Stables Gate, Chalk Farm Road, NW1 (020 7424 0692; gabeto.co.uk) 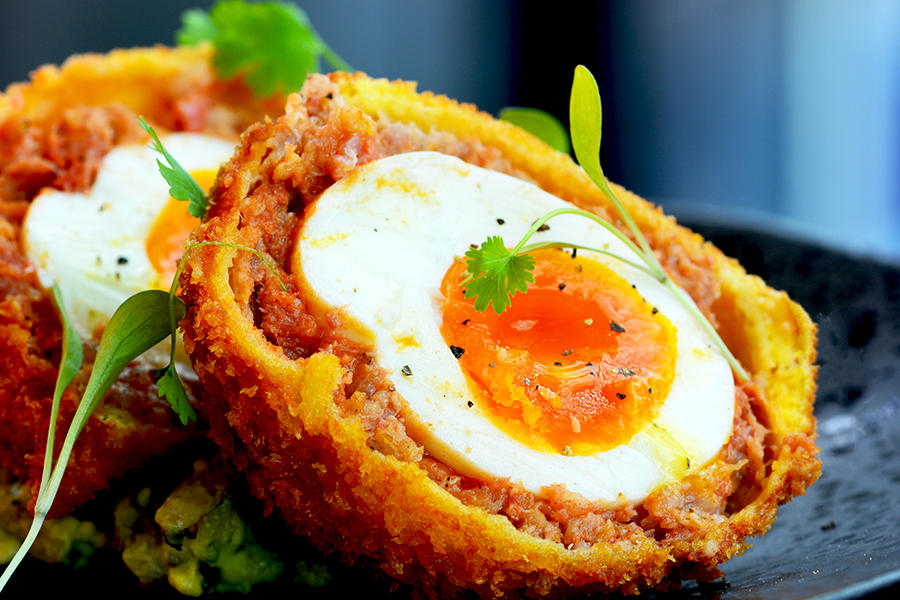 1. Place the egg, still in its shell, in a pan of cold salted water.

2. Bring to the boil over a high heat, then reduce to a simmer for exactly nine minutes.

3. Drain and cool the egg under cold running water, then peel.

4. Mix the sausage and chorizo meat with the parsley and season well with salt and freshly ground black pepper.

5. Roll sausage and chorizo meat into a ball and press between cling film until flat.

6. Roll the egg in the seasoned flour until coated.

7. Place the egg on top of the sausage meat, then wrap, ensuring the coating completely covers the egg.

8. Dip the sausage meat-coated egg in the beaten egg, rolling to coat completely, then dip and roll into the panko breadcrumbs until covered.

9. Heat the oil in a deep heavy-bottomed pan until a breadcrumb sizzles and turns brown when dropped into it.

10. Carefully place the scotch egg into the hot oil and deep-fry for 8-10 minutes, until golden and crisp and the sausage meat is completely cooked.

11. Carefully remove from the oil with a slotted spoon and drain on kitchen paper.

12. Mash the avocado with a fork and sprinkle with chilli flakes and a squeeze of lime before placing scotch egg on top to serve.